Anti-bribery law has found eight US firms in violation

New Delhi: At least eight American companies operating in India were found to have violated the US law that prohibits bribing foreign government officials to further their business interests, long before Wal-Mart Stores Inc., the world’s biggest retailer, started probing suspected violations of the statute by some executives at its local unit.

In the last of those eight cases, in July 2011, distiller Diageo Plc paid $16 million (around ₹ 90 crore today) to settle bribery-related offences spread over six years in India, Thailand and South Korea.

To be sure, more firms may have violated or been found to have breached the US Foreign Corrupt Practices Act (FCPA), because there is no single exhaustive source that aggregates such cases.

And given the growing economic links between the US and India, even more American firms operating in India may be subjected to scrutiny under the law, enacted as far ago as in 1977. 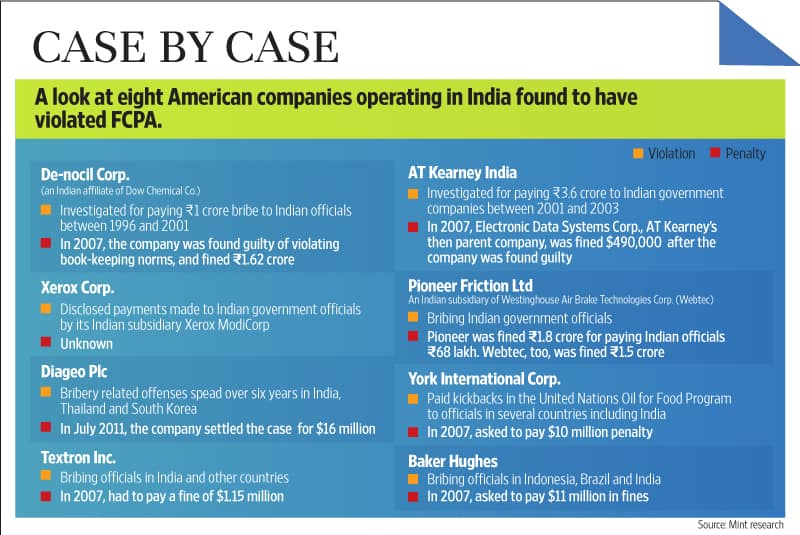 Wal-Mart said on 15 November that it had started inquiries into potential violations of FCPA in India, Brazil and China. The US department of justice and the Securities and Exchange Commission are looking into allegations that Wal-Mart systematically bribed Mexican officials so it could more quickly open stores.

A Mumbai-based legal expert on FCPA, working with a leading law firm, said FCPA was analogous to the Prevention of Corruption Act (PCA) in India. “In fact, the PCA is far more stringent than the FCPA, as it prohibits the use of ‘speed money’ in any transaction, which the latter allows," this legal expert said on condition of anonymity.

“Speed money" refers to the pay-offs typically made to government officials to speed up any business process.

In India, however, the effectiveness of the law is compromised by laxity in enforcement, said the expert.

Vidya Rajarao, leader of the forensic services practice at audit and consulting firm Price Waterhouse India Pvt. Ltd, agrees. “The FCPA does provide for a narrow exception for speed money or grease money. But it is enforced far more stringently than the PCA," she says. “Companies are afraid of the stringent penalties that are imposed on them, so they voluntarily report such cases. In India, enforcement is sporadic and random," she said.

Neeta Potnis, senior director at Deloitte Touche Tohmatsu India Pvt. Ltd, said that globally, FCPA “is quite stringent in terms of enforcement by the US authorities".

She added, “Any US entity that operates in India would be covered by it. The coverage is also as stringent as for any other US entity across the globe. FCPA is a US legislation and companies operating here have to make sure they comply."

According to Potnis, non-compliance with FCPA results in penalties; it also leads to a potential loss of reputation, besides having a financial impact. “Impact on reputation is very high when issues of compliance arise," she said.

Quite a few cases have taken place in India, Potnis added, without naming any company. “These have led to penalties of different kinds... Companies need to put in anti-bribery norms and train business associates," she said.

A 2011 report by the Deloitte forensic centre said that although FCPA dates back to 1977, enforcement of the law has been ramped up in recent years as “accelerating globalization has increased the opportunities for FCPA abuse".

The report added that India’s “propensity for corruption is unmistakable", and that FCPA was “particularly challenging for companies operating in corruption-prone countries such as India".