New Delhi: The barely 160 sq. ft room inside the synergy building at the Indian Institute of Technology, Delhi, has nothing extraordinary about it. It is occupied by a few brochures portraying the brain, two posters, six computers and an equal number of people—all in their 20’s. 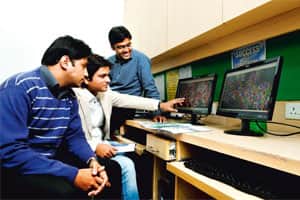 Driven by a passion to do something of significance on their own, some students and alumni of IIT-D joined hands to set up NI with a capital base of a little more than ₹ 3 lakh. The company aims to create a software to facilitate “target discovery" that helps cut the cost and time required in delivering drugs to the market.

“We are exploring science for better healthcare. Our company is doing two things—focusing on target discovery at genomic and proteomics level for diseases, and simultaneously screening for lead molecules for our clients from our molecule library," said Avinash Mishra, director and co-founder of NI. He was earlier working with AstraZeneca, a British pharmaceutical and biologics company.

“Students from middle-class families always wish to achieve something. They don’t want their next generation to face problems as they have. I am no different," said Mishra, whose mother works in the electricity board of the Bihar government after his father expired.

And certainly, this thought binds his co-partners Madhup Benawat and Sahil Kapoor to work harder to finally see a day when all of them can produce a “novel drug molecule" and take it to the market as a drug. “These are initial days but we want to make our company an integrated one, when we can design a target molecule, experiment it in wet-lab (physical lab), do animal trials, human trials and finally take it to the market," explained Kapoor, the son of a doctor in Amritsar, Punjab.

Kapoor, who for a brief period worked with Dr Reddy’s Laboratories Ltd, feels three people helped him zero in on this venture: his father offering free treatment to common people, a dedicated senior in at his previous workplace Dr Reddy’s, and Jayaram.

What about the partners? “We three think alike. My partners Madhup and Avinash are fantastic scientific brains. So we may be young minds but what we do, we do it with perfection."

NI has already given a pharma company a molecule after screening it through its library. “It took the team eight months to service the international client," Kapoor said, but didn’t divulge the name of the firm or the disease it is working on. “These are pretty confidential parts of the agreement."

So what exactly do they do for their clients?

The partners explain that when a pharmaceutical firm gives them a target, they screen through 13 million drug-like molecules through computational methods to reach the 1,000 molecule mark, which is then further filtered to 100 and finally 10.

“We give the 10 best options to the client and are quite confident that one of these will be the lead molecule. After that, the client is free to do wet-lab experimentation before going to the trial stage," explained Benawat, who is in the final year of his dual degree programme in chemical engineering at IIT.

Kapoor said the process can reduce the time of searching for a lead molecule by 50%.

Along with the 10 best molecules based on computational validity, the company gives clients 10 details of the lead molecule, including its toxicity and binding report, the groups involved and whether it is patentable or not. The accuracy level of their computational validation is above 90%, he claims.

Mishra said NI is entering its expansion phase and seeking to forge more partnerships with pharma firms, research scientists and medical chemists. He said though they are growing, the main challenge is to convince established scientists about the benefits of the computational method.

“We are not saying that it’s a replacement to wet-lab. But computational biological research is supplementary and can cut cost by reducing time required for molecule screening process," Mishra explained.

The second challenge is the cost. Some scientists who can avail the service say that the computational method is a bit expensive. “But we cannot run on a loss," said Kapoor, adding that the fee ranges from $2,000 to $1 million. “It depends on what exactly a client demands."

Ask them about the funding and all the three acknowledge funding is key for their expansion and they are in touch with some venture capital funds and angle investor networks to raise funds.

“Finally, we dream to become a genome-to-drug company," said Kapoor.