Larsen, who has worked for Dow Jones for more than a decade, was appointed president in 2010. He is leaving the company as it takes shape under chief executive officer (CEO) Lex Fenwick, who was appointed to the position in February. 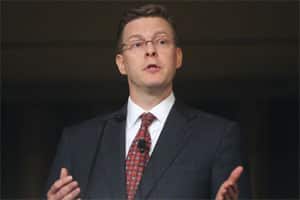 Larsen did not immediately respond to a request for comment.

As president of Dow Jones, Larsen was responsible for business operations for the Wall Street Journal, MarketWatch, Factiva and Dow Jones Newswires. He started with Dow Jones in 1999 as the corporate director of strategic planning and development and worked his way up through the company, including the oversight of the Journal’s online business.

The Wall Street Journal was one of the first newspapers to charge readers for access to some of its online content.