“A high-level team is working on a project to identify what all can be imported from India and what will be the cost benefit," said V.D. Wadhwa, managing director, Timex Group India. 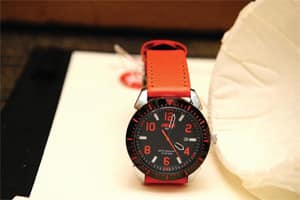 A watche from Timex.

“The report is positive and in principle there is a directional agreement to manufacture in India. Some action should happen in the current year," said Wadhwa.

He declined to put a number to the likely investment in India. “It is premature to comment on what kind of investments we would make as we still need to identify what we would manufacture here," he said.

Timex entered India in 1992 in a joint venture with Titan Industries Ltd. The joint venture broke up in 1998. Timex is the country’s second largest watch maker and retailer, only behind Titan. It is the only multinational watch maker to have a manufacturing base in India, with close to 80% of its designs being India-specific.

For Timex, which operates across 100 countries, India is the only geography where it has a design centre and a manufacturing base catering to the local market.

Wadhwa said it is important to manufacture in India and meet part of the global requirement with the appreciation of dollar and higher wage costs. Manufacturing in China is no longer cost-effective.

“If we start manufacturing in India, we would need to develop the vendor base. The vendors are not quality-conscious and we would have to invest in developing that," said Wadhwa.

The timewear industry in India is estimated to be worth an annual Rs4,000-4,200 crore, according to a report by the All India Federation of Horological Industries. The mid and premium segments account for more than half the sales at Rs2,500 crore. For Timex, which introduced luxury and fashion brands such as Salvatore Ferragamo, Versace, Marc Ecko and Nautica in the last year, sub-Rs5,000 watches contribute 80% to sales, said Wadhwa.

“India is an important market for most manufacturers, and consumer companies are looking at India as a manufacturing hub outside of China as a way to diversify the risks," said Pinaki Ranjan Mishra, partner (retail and consumer practice) at Ernst and Young.

Bringing down costs is also on the agenda of the Indian unit of Timex after the rupee’s depreciation. The rupee depreciated by about 7.5% in the December quarter and has fallen 14.25% since August.

Timex Group India’s stock hit a 52-week low of Rs17.50 on 5 January as investors expected margin pressure to dent its full-year earnings, which will be announced later this month. On Monday, the stock closed 4.28% lower at Rs22.35.

“Roughly 40% of our material requirement is currently imported. We are doing import substitution to bring it down to 30%," said Wadhwa.

The company is also planning 8% weighted average price increase across its range of watches this month, said Wadhwa.

“The rupee depreciation is a concern for costs," a 28 November report by JPMorgan said, predicting yet another price review by the end of December, but that increase did not happen.

Operating profit margins, a measure which indicates how effective a company is at controlling costs, are under pressure for both Titan and Timex.

Analysts estimate the margins to remain range-bound as both companies are expanding their retail operations.

Titan, which has different retail formats like the World of Titan, Helios and Fastrack, is also expanding its network.

The World of Titan, the largest chain with 330 stores, will add 25 to 30 stores every year. Helios, a mid-premium to accessible luxury watch retail chain that stocks watch brands including Fossil, TAG Heuer, FCUK and Citizen, will double the store count from 30 to 60 by next year, said Ajoy Chawla, vice-president, Titan Industries.