In 1926, the Parisian jewellery workshops of Cartier SA received a special delivery: a trunk full of precious stones and jewellery, including the De Beers diamond, from the Maharaja of Patiala, Bhupinder Singh, with a request for creating a ceremonial necklace worthy enough for a king. 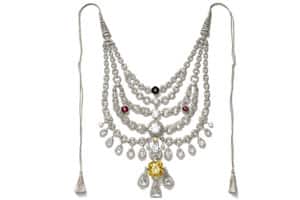 Reconstructing a dream: The Patiala Necklace; (below) Maharaja Yadavindra Singh, the son and heir of Bhupinder Singh, was the last man to wear the necklace.

The massive art deco necklace is famous for its unmatched brilliance and extraordinary design. With five rows of diamond-encrusted platinum chains, the necklace originally

contained 2,930 diamonds and weighed 962.25 carats. In the centre, a cascade of seven large diamonds, each between 18 carats and 73 carats, surmounted a pendant where the iconic De Beers rested. A tobaccocoloured diamond of 18 carats and two rubies weighing 29.58 carats completed the colour scheme. 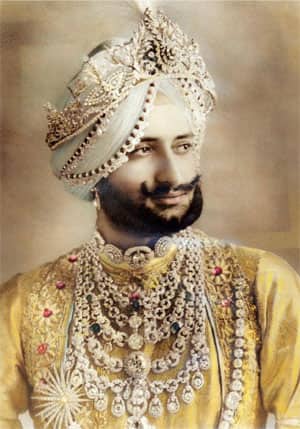 The masterpiece looked so exquisite that Cartier sought the Maharaja’s permission to put it on display before sending it to India.

The $25 million necklace sparked controversy after the end of the Raj, when it disappeared mysteriously from the royal treasury of Patiala in April 1948. The last man to wear it was Maharaja Yadavindra Singh, son and heir of Maharaja Bhupinder Singh. Five decades later in 1998, Eric Nassbaum, a Cartier representative, stumbled upon the remnants of the necklace in a small antique shop in London. All the big stones were gone, including the De Beers and the seven surrounding diamonds.

Cartier tried to recreate the original, replacing the missing diamonds with white sapphires and white topazes, but the result was disappointing. So they switched back to diamonds. While the search for the replacement continued, Cartier used cubic zirconium to substitute the diamonds and synthetic rubies in place of the original Burmese gems.

It took four years for Cartier to create a replica of what was once among the most exquisite pieces of jewellery in history.