Sales at Maruti grew 12.1% in December to 1,19,286 units, driven by models such as the Dzire sedan, the Baleno hatchback and the Vitara Brezza SUV

Sales at Maruti grew 12.1% in December to 1,19,286 units, driven by models such as the Dzire sedan, the Baleno hatchback and the Vitara Brezza sport utility vehicle (SUV), according to the monthly sales figures disclosed by the firm. 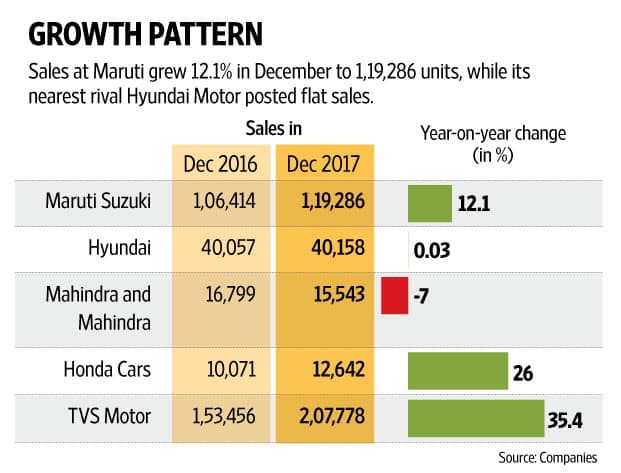 “Hyundai is facing acute production constraints and the company does not have the room to manufacture more vehicles like Creta, which actually has high demand," said Anil Sharma, principal analyst, automotive forecasting, IHS Markit.

Mumbai-based Mahindra and Mahindra Ltd (M&M) said sales of its passenger vehicles, such as Scorpio and Bolero models, declined 7% to 15,543 units during the month.

“Mahindra on the other hand has not been able to make a mark in the compact UV (utility vehicle) segment and unless the company introduces a new offering, volumes will be difficult to come by. Rural demand has also been flat which has impacted the sales of M&M," Sharma added.

Rajan Wadhera, president (automotive sector), M&M, said his company is happy with its performance in 2017.

“We are happy to have ended December 2017 with a growth of 8%. Our commercial vehicles growth for December has been encouraging at 24%, and we are particularly buoyed by our ongoing strong performance in the medium and heavy commercial vehicles (MHCV) segment, which indicates a vibrancy in the economy. Global automotive trends such as electric vehicles and shared mobility will be key indicators for 2018," Wadhera added.

In FY18, between April-December, passenger vehicle sales have grown 8.4% to 2.18 million units.

To be sure, December typically is not a healthy month for auto sales as customers postpone purchase decisions to avoid depreciation in value of vehicles in the new year.

On the other hand, auto makers resort to several marketing gimmicks to push sales, including discounts and announcements related to price increase, which may or may not happen.

But, what could be a matter of worry for Maruti is the decline in sales of its flagship sedan, Ciaz, whose sales plunged 35.8% to 2,382 units as the new Hyundai Verna launched in August gained traction with buyers.

A decline in demand for Ciaz could also be attributed to an increase in taxes on hybrids under the goods and services tax (GST) regime.

Ciaz’s hybrid version was a major driver for the model’s sales.

Offerings such as the Honda City and WR-V (a compact SUV) have managed to help the carmaker return to double-digit volume growth after a period to continuous decline in sales.

“HCIL experienced robust growth during 2017, backed by good demand for all our products across segments, especially the Honda City and WR-V. Honda City has emerged as the highest selling mid-size sedan during 2017," said Yoichiro Ueno, president and CEO, Honda Cars India.

Other manufacturers such as Hero MotoCorp Ltd, Honda Motorcycles and Scooters India, Tata Motors Ltd and Ashok Leyland Ltd did not report their sales numbers on Monday.