This financial year has set a record for mergers and acquisitions (M&As) in India, with deals worth $61.26 billion—more than double the value of transactions last year. In 2015-16, M&A deals were worth $27.62 billion. The sharp increase was a result of both strong foreign buying interest and consolidation underway across sectors including telecom, cement and energy. From Rosneft PJSC’s acquisition of Essar Oil Ltd to the merger agreement between Vodafone India Ltd and Idea Cellular Ltd, 2016-17 has largely been a year of big ticket M&A deals. Inbound deals worth $21.2 billion and domestic deals worth $35.6 billion were reported in the financial year. 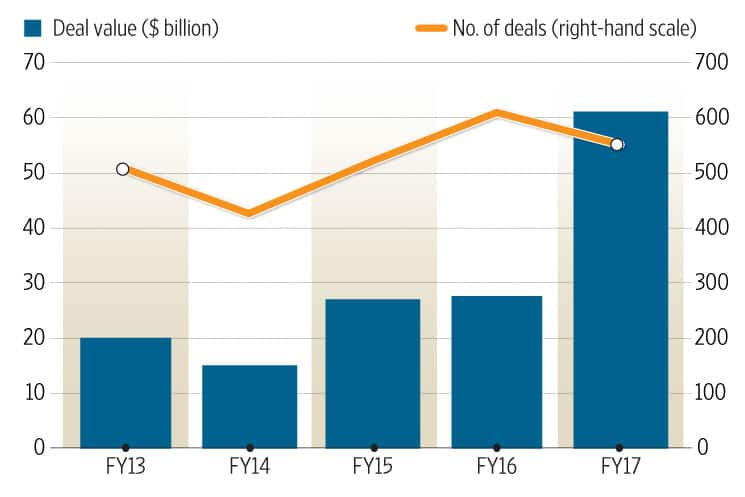 Private equity (PE) investments have declined in the financial year to $15.1 billion from $17.8 billion in the previous year. Buyouts (control transactions) continued to be a dominant theme this year too, with $3.63 billion of such deals being reported in 2016-17 ($3.69 billion in 2015-16). The information technology (IT) & IT-enabled services sector has been the favourite among investors with transactions worth $5.9 billion, followed by banking and nancial services, where deals were worth $2.26 billion.

Canadians emerged as one of the most prolific dealmakers, with transactions doubling in the year to 12 from six in the previous financial year. Almost all large Canadian funds such as CDPQ (Caisse de dépôt et placement du Québec), CPPIB (Canada Pension Plan Investment Board), Brookfield Asset Management Inc. and Fairfax Financial Holdings Ltd have on-the-ground presence in India and have made significant commitments. Some top deals include Canadian alternative asset manager Brookfield inking a $1.65 billion deal to buy a majority stake in Reliance Communications Ltd’s tower assets, CPPIB and KKR & Co. Lp picking up a stake in Bharti Infratel Ltd and CDPQ’s partnership with Edelweiss Financial Services Ltd to invest nearly $750 million in stressed assets and specialized corporate credit in India over the next four years.