New Delhi: The country’s law ministry has asked the Bureau of Energy Efficiency (BEE) to notify fuel efficiency standards and labelling for vehicles in India, effectively ending a year-long turf battle between ministries.

“BEE has been directed to formulate and notify the fuel efficiency standards," said a government official who did not want to be identified. The official was present at a recent meeting on the issue, which was attended by industry representatives and associated ministries and convened by the ministry of road transport and highways.

The move was independently confirmed by a senior official at the Prime Minister’s Office, or PMO.

Indian vehicles have to meet emission standards but these have to do with pollution control rather than fuel efficiency.

The law ministry had been given the task of deciding whether the transport ministry or BEE would notify such standards for the automobile industry. In 2007, BEE along with the Petroleum Conservation Research Association, which falls under the petroleum ministry, had first mooted the idea of fuel efficiency standards, which was reported by Mint on 15 August 2007. 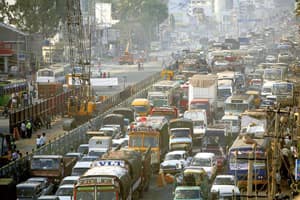 Smokescreen: A file photo of New Delhi’s traffic seen through a haze of pollution. The transport ministry had objected to Bureau of Energy Efficiency’s proposal on standards and constituted its own panel. Qilai Shen/Bloomberg

BEE is also the agency which formulates standards and star labels for consumer products such as air conditioners and refrigerators. Fuel efficiency standards for cars are proposed to be established for each of the nine vehicle weight classes at present used for setting emissions standards.

Each weight class typically shows a huge variation between the best and the worst. BEE proposes to use these two extremes as a band and inform car buyers about the band as well as details of where each of the vehicles in the class features in this band. The agency is yet to figure out how to arrive at a star rating for cars.

The issue has now been settled, said the official. “There have been enough discussions on CO2 as the basis in the past. It was decided in the meeting that CO2 emissions will not be the criterion," he added.

Pawan Goenka, president (automotive), Mahindra and Mahindra Ltd, and vice-president of industry lobby Society of Indian Automobile Manufacturers (Siam), said that he would not like to comment on internal goings-on within ministries. Mint couldn’t immediately ascertain whether the choice of a fuel efficiency standard over a carbon dioxide one would affect the auto industry in any way.

Last month, US President Barack Obama announced a tightening of fuel efficiency norms. At present, average fuel efficiency norms mandate that cars and trucks give at least 25 miles to a gallon (3.78 litres). Starting 2012, American cars will have to increase that by 5% every year taking it to 35.5 miles per gallon by 2016.

Samar Srivastava contributed to this story.