Since General Motors Corp. (GM) filed for bankruptcy in the US, Karl Slym, president and managing director of the India arm, General Motors India Pvt. Ltd, has been on fire fighting mode to protect the brand.

The Briton is steering the company through tumultuous times as it reassures customers and promises new launches on schedule.

The company has sold some 24,000 units in the first five months of this calendar year, down about 6,000 units from the corresponding period of the previous year. 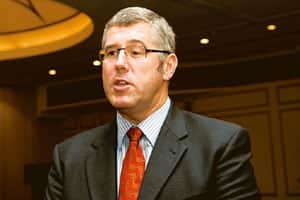 Aggressive market: Slym says the firm’s growth target will be driven by new models and things such as warranty and the Spark. Ramesh Pathania, Mint

With the US government taking stake in GM, will the corporate culture, which has often been blamed as one of the reasons for its downfall, change?

Yes, the corporate culture will change not necessarily because of the US government being part of our ownership but because of the new leadership. Part of the new GM is not just an asset allocation but it is also a change in the way we operate. The new GM needs to be faster, leaner and meaner.

We have always tried to make the customer first, but an additional emphasis that everything we do is thinking about the customer and not sometimes what may be our own thoughts.

In India, a lot of that already happens...and the low-cost importance of India has made us be more lean and frugal as well as by the fact that we have to operate against Maruti (Maruti Suzuki India Ltd) and Tata (Tata Motors Ltd).

(On global culture changes) speed in decision-making and accountability. A little bit more risk-taking in line with the speed aspect.

GM India offers sweeteners such as an extended warranty period, refunds on maintenance spends above a stipulated level. Will there be more sweeteners?

I don’t think warranty is a sweetener. One of the things that people need to feel happier about GM in India is the cost of ownership. It (warranty) is to address a perception in the market that it is expensive to own a Chevrolet.

In order to achieve your 10% sales growth target for the calendar year, will we see price cuts?

We don’t have any plans (on price cuts) that’s for sure. We have the (Union) budget on 6 July, there are some big price tags on duties and levies that could be removed immediately (such as) Rs15,000 on a 1.5-litre (engine), Rs20,000 on a 2-litre (engine) and then the consumer can see those reductions straight away. (The 10% growth target) will be driven by new models and things such as warranty and the Spark.

You’ve been with GM since 1995 in various locations from the US to Korea. Is your stint in India the most testing period in your career?

It is definitely the most vibrant with India being such an aggressive market and since there have been major economic or company items as well. So, it has probably been the most exciting spell. I often think, what else would you do rather than automotive in India.