Operating profit margins are at 30.89%, the highest since March 2011 quarter, shows an analysis of 186 firms

Mumbai: Operating profit margins (OPMs) of top Indian companies continued to expand in the March quarter, and rose to their highest level in at least six years, benefitting from the lag impact of the decline in commodity prices.

Cairn India Ltd and Vedanta Ltd have been excluded from this study as they have reported large one-time impairment charges.

“The transmission of reduced interest costs has not happened. The cost of borrowing has not come down in particular for infrastructure companies. However, they have started refinancing. So, it will eventually come down, but with a lag effect," added Choksey. 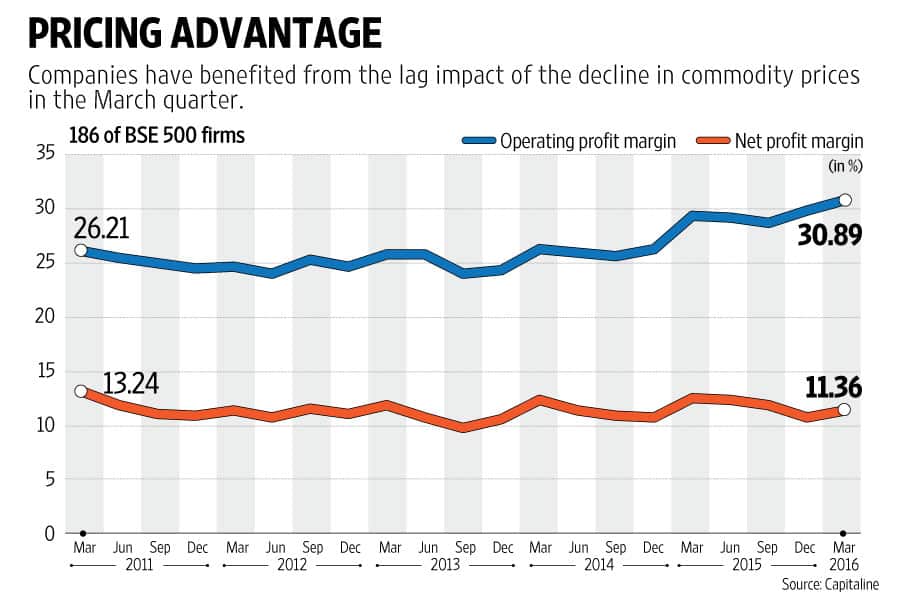 Commodity prices rose in the March quarter, but have fallen in previous quarters and the impact on companies shows with a lag.

The Bloomberg Commodity Index of 22 raw materials, from oil to metals, rose 0.34% in the March quarter but fell 20% during the year ended 31 March. The index has risen 7.5% since April.

The aggregate net sales for these firms rose 6.93%, their best show since the June 2014 quarter. Aggregate net profit dropped 3.05%, compared with a drop of 1.18% in the preceding quarter. The net profit decline is primarily attributed to the bad show of state-owned banks as they made provisions for bad loans.

If we weed out banks, financial services companies, IT firms, exchanges, rating agencies and courier services firms, the resultant set of firms will broadly represent the manufacturing industry. The oil and gas sector is excluded as its revenue model differs from other industries.

After these exclusions, 116 companies of the above sample saw OPMs rise to 23.42%, the best since the March 2011 quarter, while their NPMs climbed to 9.43%, the best in last three quarters.

While margins have steadily improved, with commodity prices recovering, the advantage may not extend into this fiscal.

“We see some risks to margins going ahead," said Nirav Sheth, head of research at Edelweiss Securities Ltd.

“With commodity prices recovering from recent lows, we may not see the trend of improving margins over the next few quarters, unless the recovery in commodity prices is temporary," Sheth said.

Some believe the recovery in commodity prices is durable.

In an interview on Wednesday, Mark Mobius, executive chairman, Templeton Emerging Markets Group, Franklin Templeton Investments, told Mint that the worst was probably over for the commodity markets.

“I believe we are now in a recovery phase," Mobius had said, referring to prices of commodities.

“Of course, there would be setbacks from time to time but, generally speaking, we are in a very good position with regards to commodities. It won’t be rapid, it won’t be overnight but it would be very good," Mobius had added.