Deccan Chronicle and MJ Akbar said to be parting company

Deccan Chronicle and MJ Akbar said to be parting company 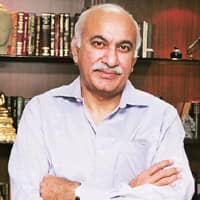 He didn’t want to be identified as he is not authorized to speak to the media.

While the reason or the terms of severance could not be verified, a person close to the development said there have been ongoing disagreements between Akbar and Deccan Chronicle over the terms of stake dilution in Asian Age Holdings. When contacted by Mint, Akbar, who was travelling outside the country, said he could not comment until he was back.

Other executives of Deccan Chronicle could not be reached for comment.

Deccan Chronicle increased its holding in Asian Age to 90% in May 2005. Prior to that, it had held about 23% in the newspaper. Akbar holds a part of the remaining 10% in the company he founded in 1993.

Akbar, who is widely regarded for his writings, has previously edited publications such as Onlooker, Sunday and The Telegraph.

While there was intense speculation in the Capital’s media circles on Friday that Akbar could be replaced by Chaitanya Kalbag, former Hindustan Times editor, Kalbag responded to a reporter’s query by saying that it was news to him.