Nasscom to look beyond revenue for annual IT forecast

Bengaluru: Nasscom, the group that represents software and services companies in India, will consider metrics beyond revenue growth at each of its member companies while presenting its annual revenue growth forecast.

Nasscom chairman Rishad Premji said that the lobby group is currently assessing several qualitative and quantitative parameters, with another Nasscom executive adding that the new methodology will be implemented from 2019-20.

Many analysts and executives have argued that since Tata Consultancy Services (TCS), Infosys and Wipro now account for 23% of the country’s $167 billion IT industry, and are also embracing newer technologies, it is unreasonable to expect the big three companies to grow at a pace similar to much smaller firms.

Some of the large firms are also unhappy at being benchmarked against Nasscom’s industry growth forecast that is based on the aggregation of revenue growth estimates of each of its members, many of them much smaller firms.

The change in Nasscom’s approach is reflective of the transformation sweeping through the industry.

“As the industry is rapidly transforming its business models and solution offerings, only a revenue-based metric may not be an adequate reflection of the industry outlook and performance. Nasscom is assessing what the different parameters—qualitative and quantitative—that can be published to reflect the changing nature of the sector," Premji told Mint last week.

Nasscom has, however, ruled out defining digital, the fuzzy umbrella term used by companies to classify revenue generated from areas generally classified as social, mobile, analytics, cloud computing and Internet of Things, as it believes it is not practical to have a standard definition. 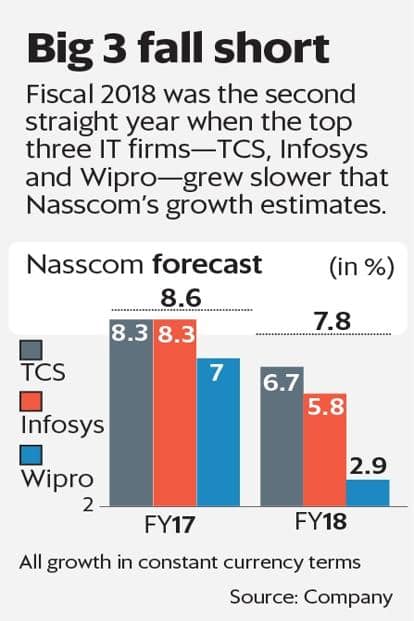 “There are many ideas being discussed. So obviously, for all companies, digital is growing, and that is one metric which will be looked at. But then there are metrics like productivity, volume versus value of work and so we are looking at how we can include these and give a guidance which together captures most of these elements of transformation before starting to give a growth outlook, say from FY19 onwards," the Nasscom executive cited earlier said on condition of anonymity.

The year 2017-18 marked the second straight year when the country’s three largest IT firms grew slower than Nasscom’s forecast.

“While Nasscom is an aggregation of a very large spectrum of companies, there is a large dispersion in business models and business strategies of companies. So, I think this obsession with benchmarking with Nasscom is no longer valid and we need to move on from that. A few years back, it made sense. I guess now we have to give up on that benchmark," TCS chief executive Rajesh Gopinathan said in January.

The change in approach by Nasscom will assuage some of the concerns of bigger IT companies.

“This is very heartening and encouraging. Analysts need some markers to predict and understand the growth and the transformation. As an independent, industry body, Nasscom’s approach will help the external community, such as analysts, investors, to benefit as they have better markers and this gives them confidence," said Krishnakumar Natarajan, executive chairman, Mindtree Ltd.