Home / Companies / People /  Can Arvind Saxena drive General Motors out of the rut?

Can Arvind Saxena drive General Motors out of the rut?

Far from Detroit, the idea seems to have struck a chord with Arvind Saxena, president and managing director of General Motors (GM) India Ltd. For Saxena, the colours are red, yellow and green. Red denotes trouble, yellow stands for in-progress and green is acceptable.

Around 20 months after he joined the Indian unit of the American company, Saxena, 58, claims that all the indices are green. The firm’s performance is acceptable across areas such as production, quality, vehicle sales and after sales, he adds.

As if the word had reached GM’s headquarters in Detroit (and in what is also seen as a sign of how important India is becoming to global car makers), the board, led by the company’s chief executive Mary Barra visited India earlier this month to review Saxena’s progress. It was Barra’s third visit to India in 15 months.

But, make no mistake. A turnaround of the Indian operations is still some distance away. GM India has now slipped to the 10th position by market share. In the year to March 2016, when the car market is set to rebound on the back of a decline in both interest rates and fuel prices, Saxena forecasts sales at around 55,000 units. Though domestic sales tanked 41% during April-September, GM has found a new lease of life in exports, a conscious decision taken by Saxena to make a “quick win".

According to him, the turnaround is happening in the way the company is doing business in India. The fundamentals are being corrected.

“Business has to be done differently from what we have done for the last 19-20 years. If we do the same things, our results will be no different," Saxena said at the company’s new office in Gurgaon, which got featured in Scoopwhoop.com’s 16 cool offices to work at.

The office boasts of an open-desk culture where seats are occupied on a first-come, first-served basis, and offer employees the liberty of sit and work wherever they want to. There are open cars that serve as meeting booths and a foosball table. 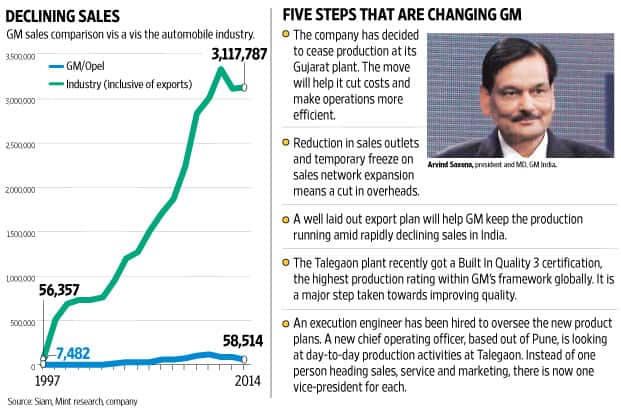 An industry veteran of 31 years, Saxena was appointed GM India’s president and managing director in February 2014, having last worked as managing director of passenger cars (Volkswagen brands) and a board member of Volkswagen Group Sales India Pvt. Ltd.

Saxena was given the job of turning around the fortunes of GM India at a time when the company’s sales had been declining in the wake of the Tavera recall. His appointment ended a decade-long tradition of foreigners heading the company’s India operations as the Detroit-based management of the auto maker opted for an Indian with substantial local experience to succeed Lowell Paddock, who moved to GM’s international operations.

The Indian unit still lags behind GM’s operations elsewhere in the region. In fact, since entering India in 1994, the company’s vehicle sales crossed 100,000 units only in 2010 and 2011, and dropped thereafter.

Since taking over, Saxena has tried to consolidate the company’s business. In July, the company announced it would cease production at its Halol plant in Gujarat. It brought down the number of dealerships from 280 to 223 and decided not to add to the network unless absolutely necessary. It moved to a new office in Gurgaon, a few blocks away from its old one, saving 40% on the rent. And it put in place an export plan.

GM India has orders to export 19,500 units in 2015-16, which will increase to 80,000 by 2018. The company has started working a second shift at its plant in Talegaon, Maharashtra. The plant recently got a Built In Quality 3 certification, the highest production rating within GM’s framework globally. It plans to introduce 10 new models in five years.

Saxena believes these are building blocks that will help him rebuild GM India.

The plan, he indicates, has the buy-in of HQ.

“If GM can commit $1 billion in investment, which it did for the first time in 19 years, it shows that there is commitment. They (HQ) are in agreement with the way we want to go forward," Saxena said.

But, there are bigger challenges, including one that involves people—at least 1,200 workers at the Gujarat plant have been offered voluntary retirement as the company looks to close the plant by the middle of next year.

Saxena claims ceasing production at the plant is an absolute necessity.

It was either that or the prospect of losses for “the next 19 years".

The problem was one of capacity utilization.

“If I cannot use the entire capacity and I run two plants at 33% capacity utilization, there is no way I can make money. I would rather have one plant where I can maximize my production and have more efficiency in the system," he said.

After meeting Prime Minister Narendra Modi on 28 July, Saxena wrote to the Gujarat government seeking permission to close the plant but getting it won’t be easy, said a person familiar with the matter who asked not to be identified.

“There are people involved and it does not reflect well on the state government. The matter might take a political turn at the end of it," this person added.

The decision to move out of Gujarat could be a setback to the state government that is trying to project the state as the automobile hub.

On its part, GM is in the process of offering a very generous package, which includes statutory benefits such as 45 days’ salary for every year of completed service while current Indian laws require a company to offer only 15 days’ salary for every completed year of service. A new proposal being considered by the labour ministry requires companies to pay 45 days of compensation for every completed year, Mint reported on 10 June.

Workers also have an option to join GM India’s plant in Talegaon. Saxena said his company has identified 176 workers from the Halol plant who will join the company’s operations in Talegaon.

“We will treat each and every employee with respect and we will be fair to them. We have applied to the government. We are looking at every possible way to handle it best we can," Saxena said.

The government of Gujarat met workers and the company’s management in October for a first hearing. Nihil Mehta, general secretary of the Gujarat Kamdar Mandal that represents 900 workers at GM’s plant, said that the second government hearing concluded on Tuesday with both parties given time until 3 December to revert with objections and feedback, if any.

“In our opinion, GM’s application should get rejected. We have built a strong case against the company’s decision," Mehta said. “A decision to this effect should come after 30 December."

He claimed GM employs 1,600 permanent workers and at least 5,000 contract workers at its Gujarat plant.

There will be several more of these meetings, says a second person familiar with how these things work. “But, very rarely is a company is allowed to cease production," he added. And if that is allowed, the company “will have to reimburse all the incentives it received from the state government as electricity and land subsidy, industry and sales tax exemption, etc."

In GM India’s case, the company may have to reimburse up to ₹ 800 crore, this person added.

GM India has also consistently failed to live up to the expectations of its customers. To address this, Saxena has launched a new programme called Chevrolet Complete Care. He thinks customer satisfaction is also linked with both internal quality of products and also network quality. While internal quality is something that Saxena believes he can fix quickly, network quality is where a much larger number of people will get impacted and that’s the area of focus at the moment. 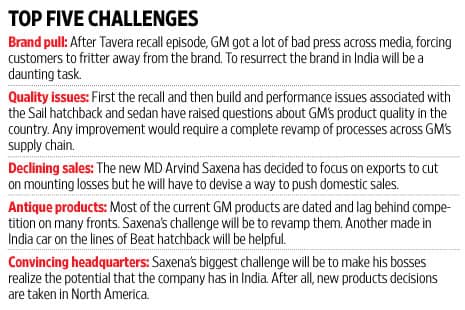 “I am not saying that is something that will change the customer experience but it definitely is aimed at bringing in a commitment that we want to change. By the time we are ready with our new products, we will be geared up both externally and internally to make an impact in the market," he said.

But, it is not going to be a joy ride for Saxena, said Abdul Majeed, partner and auto practice leader, PricewaterhouseCoopers.

“They have never made significant inroads with any of their vehicles. They don’t seem to have a credible strategy like Ford," Majeed said. “Distribution is another problem. What is heartening to see is some sort of commitment from the parent, which is natural as they are in a much better financial position now than five years ago."

Saxena has a five-year time frame in mind by when GM India should stop incurring losses.

“When I say business needs to be sustainable, that means we need to stop bleeding. So, in the next five years, if we see we have stopped bleeding and we turn positive, we will be happy with that. We have not made money for so many years, we will not make money for some more years. I think with this model of operations, we will possibly sustain our operations."

By the end of five years, Saxena hopes to sell 70% of GM India’s production in the Indian market while exporting the rest. After it ceases production in Gujarat next year, the company will have an annual capacity to produce 220,000 units a year.

“The point is, if I can sell more cars, then I can make more money, but it is very academic at this stage. I have to get somewhere first before I look at other things."

Saxena’s five-year count starts from July (when the Halol announcement was made).

Five years on, by July 2020, the firm would have 10 new products, none more than three years old, and be represented in every segment in the market, he said.

Towards that, Saxena has strengthened his team and added various new functions. An execution engineer has been hired to oversee the new product plans. A new chief operating officer, based out of Pune, is looking at day-to-day production activities at Talegaon. Instead of one person heading sales, service and marketing, Saxena now has one vice-president for each. The corporate affairs and communications teams have been separated as well.

“We expect a lot of things to happen and you need people to do them. If you need to launch 10 models in five years, you can imagine the kind of activities that we need to go through. It is very easy to make a statement but there is a lot that will go behind it," he said.