State-controlled ONGC has been in talks with ConocoPhillips, the US’s third largest energy company and fifth largest refiner, for a few months. The agreement will be signed in Mumbai. The exact contours of the partnership are not known at this point.

The companies will begin cooperating in the field of shale gas through joint studies of opportunities in India, North America and other regions, an ONGC official said, on condition of anonymity.

“Whenever shale gas blocks in India are put up for auction, we may bid for them together," the ONGC official said. “In turn, we may also get some equity in the shale gas assets that they (ConocoPhillips) hold in the US."

ONGC will also consider offering a stake in the deepwater hydrocarbon blocks it holds off the eastern coast of India to ConocoPhillips, the official said.

“First, the cost associated with the development of these deepwater blocks is substantial and also ConocoPhillips has advanced technical expertise for deepwater oil and gas exploration," he said, explaining the synergies between the two companies in offshore exploration. 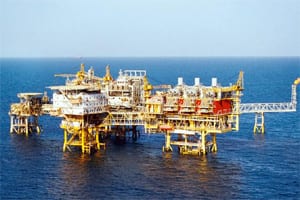 In February 2011, Reliance Industries Ltd (RIL) forged a similar partnership with UK-based energy conglomerate BP Plc. It sold a 30% stake in 21 oil and gas blocks for $7.2 billion (around ₹ 36,000 crore).

More than the money, the transaction was crucial for RIL since gas production was declining in its D6 block, also off the east coast in the Krishna Godavari basin. RIL is relying upon BP’s deepwater drilling expertise to solve the problem at D6 and the foreign firm will be at the forefront of RIL’s oil and gas operations.

The RIL-BP deal, which marked the largest foreign direct investment in India, was completed in August 2011.

Shale gas is an energy resource that the government and several Indian companies are looking to tap into to reduce the country’s energy deficit. Petroleum minister Jaipal Reddy told Parliament on 13 March that his ministry was working on a shale gas policy and this will be finalized by the end of fiscal 2013.

In November 2010, while US President Barack Obama was visiting India, an agreement for cooperation in the area of shale gas was signed between the two countries.

Several Indian firms have looked at acquiring shale gas assets abroad and work with foreign partners to learn the technology before similar assets are auctioned in India.

RIL has been at the forefront of such acquisitions, having snapped up three assets in the US between April and August 2010, at an aggregate investment of around $3.44 billion. State-owned refiner Bharat Petroleum Corp. Ltd has invested in a shale gas asset in Australia.

ONGC will also look to leverage ConocoPhillips’ expertise in developing deepwater blocks as well. The company emerged as the largest bidder in the ninth and latest round of bidding under the National Exploration Licensing Policy (Nelp), wherein it won 10 blocks, five of which were offshore.

ONGC has faced some technical issues at its existing offshore blocks for which it had to revise its production schedule, and its new US partner can help in improving performance there as well.

Mint had reported on 14 January that in a letter to employees, after completing 100 days in office, ONGC chairman Sudhir Vasudeva had stressed on the need for the company to monetize exploratory success with respect to oil and gas finds expeditiously and raise production from marginal fields.

Vasudeva had said that some of the technical expertise required to propel the company’s growth was not available in-house and it would have to forge partnerships for the same.

Such partnerships could be in the form of strategic alliances, he said.

Arvind Mahajan, head of the energy and natural resources practice at consulting firm KPMG, said he was “glad" that ONGC was looking at a partnership with a foreign firm like ConocoPhillips. It will help ONGC “fill a technology gap both in shale gas as well as deepwater exploration". The US company, on the other hand, will get an entry into the energy-deficient Indian market.

“Indian state-owned energy companies need to learn from their counterparts in China and not try to do everything themselves, but form tie-ups to gain new competencies," Mahajan said. “But signing the agreement won’t be enough. Mechanisms need to be created to share knowledge and create value on both sides."