Could you share the details of your recent joint venture with APG?

APG, which is a long-term investor, contacted us in July last year. They came down here and saw our hotels and understood our business model. We are profitable, we’ve made a profit of ₹ 100 crore this year. Our return on capital is very high. And this is what an institutional player is interested in. 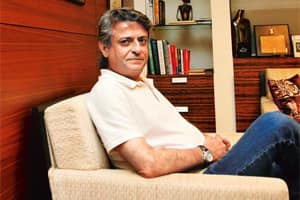 What is the plan?

Are you looking at options?

I am sitting on the cash and it is earning me 9.5%. We are travelling and looking to buy. We are open to it but most hotels are badly built.

How does India’s hotel industry compare with the industry in mature markets?

In the US, which is the most mature market, the owners of hotels are not managers; it is funds—real estate funds, pension funds or banks which own hotels. Hotel business has three parts: people who own the hotels, those who manage the hotels and those who brand the hotels. Management and brands are with the big companies like Starwood, Hilton or Accor. In a mature market, institutions not individuals own the hotel.

India has inverted pyramid of supply because most of the hotels are owned by individuals or developers. Very few are owned by institutions or companies. There is lot of black money in this business. Local high net-worth individuals own hotels in India. These are not rational investors, they build hotels for ego. We don’t look at RoE as return on equity in India; we look at it as Return on Ego. Besides, the cost of capital in the US is low and there is transparency in land acquisition and government approvals. So the asset ownership is easy and cheap. What is expensive is labour. In the US, the difference across 5-star to 1-star hotels is not on product, but on service. So you will hear an international chain say full service, limited service no service because the cost of labour is 50% of the turnover. In India it is less than 20%.

What is the potential for mid-market hotels in India?

Nearly 6.5 lakh travellers across the country need rooms every day. Then why do hotels in India, which have 150,000 rooms, have occupancy of 55-60%? The reason is there are no right-priced rooms in India. Most of them are high-priced 5-star rooms. There is no availability of mid-market rooms. That’s why these guys (travellers) don’t stay in hotels. They stay in guesthouses, with friends and relatives. It is estimated that mid-market space can consume five lakh (500,000) rooms a day, but there are only 40,000-50,000 such rooms in India.

So why aren’t there enough mid-market rooms in India?

One problem is ego. But apart from ego, the cost of land and cost of debt is very high; it is 14% in India, as against 5-6% in the US. And you have to repay it within 5-7 years whereas in the US you can repay it in 20 years. So, in the first seven years many hotels can turn sick. If you are an institutional player who wants to run a hotel in India, you have to overcome many things. Getting land at right price at right location, getting debt at right price for right duration. Third is, managing the greyness of acquisition, which is the black money you have to pay. A company like mine, which has an FDI (foreign direct investment), has no black money. So how do I compete with a guy who is paying black money? The last issue is government approvals, which are the worst in the world. The government does not provide you water or electricity; you have to set up a small city every time you build a hotel. Every day, we do water treatment for 12,000 people. We generate enough (power) to light up 2,000 houses including air conditioning, we have a mini power plant. We have to create the entire infrastructure. So people wonder why should they build a 3-star hotel by spending ₹ 100 crore. By putting in extra ₹ 10-15 crore more, they could build a 5-star. This explains the inverted pyramid. But there is opportunity that exists in the mid-market—if you can manage it at the right price.

You have also signed a joint venture with Rattan Keswani for management of hotels.

Lemon Tree’s new management company, Carnation Hotels, was set up two months back with Rattan Keswani who worked for Trident Hotels. We are looking at getting into management in next one month. For first two months, we were setting up the whole infrastructure for it. The purpose is to build scale. There are another 50,000 rooms in India which are distressed because of pure poor management.

It is opportunistic, but by 2016, if we can get to 5,000-8,000 rooms under management, it would not be problematic. With this, we will start controlling the mid-market segment in India.

Is your Red Fox brand for small cities?

Are you looking at only larger cities for this 2-star brand?

There is too much hype in India about tier II and tier III, we have studied all the cities and we have couple of Lemon Tree hotels in locations like Indore and Aurangabad. In some tier II cities, there is a reason to be optimistic, but mostly it is not so because local seths (capitalist) have built hotels there, they will provide you all the service. They are not professional, but today they can get away with this because nobody else is putting up hotels there. These are the shallow market. I have a theory for that. Let the competitors go there and kill each other; I don’t want to go there.