Mumbai: India’s largest private airline, Jet Airways (India) Ltd, is considering discontinuing its Mumbai-Shanghai-San Francisco and Amritsar-London flights because of poor response from passengers, according to a company executive, who is familiar with the development. The person asked he not be named because he is not authorized to speak to the media.

The executive added the company is yet to decide the dates when it will stop these flights, but would probably first reduce their frequency and then stop them altogether.

The airline will, however, continue to connect Mumbai to San Francisco through London, this executive said.

Jet Airways’ chief executive officer Wolfgang Prock-Schauer was not available for comment despite several attempts to reach him and messages left at his office.

In response to a query from Mint on the termination of flights on these routes, a Jet Airways statement said: “Globally, all airlines constantly evaluate performance of their routes. Especially in these difficult times, we are constantly reviewing the performances of all our routes."

The company neither confirmed nor denied that it planned to end flights on the routes concerned. 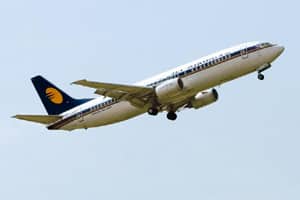 Ground clearance: A Jet Airways plane in flight. High fuel rates and low ticket prices have wreaked havoc with the financials of Indian airlines that together suffered losses of $2 billion in 2007-08. Ramesh Pathania / Mint

High fuel rates and low ticket prices wreaked havoc with the financials of Indian airlines that together made losses of $2 billion (Rs9,380 crore today) in 2007-08.

Jet Airways had launched a daily Mumbai-Shanghai-San Francisco flight on 14 June after a long wait to get the necessary approvals. By August, it had pared frequency to five times a week to cut losses.

Given the time saved on this route to the US west coast, where the US hi-tech industry is based, and is home to a significant population of Indian- and Chinese-origin professionals, Jet Airways was even considering making Shanghai its second hub, after Brussels.

Meanwhile, Kingfisher, promoted by Vijay Mallya, is in the process of applying for permission to fly to Shanghai.

A Kingfisher executive, who spoke on condition of anonymity because he is not authorized to speak on the matter, said Shanghai was one of the options the airline is exploring for one-stop operations to the US, particularly in the backdrop of high aviation fuel prices.

Kingfisher Airlines executives were not immediately available for an official response.