No penalty clause in voluntary code on vehicle recalls

No penalty clause in voluntary code on vehicle recalls

New Delhi: India’s automobile industry on Monday announced a voluntary code on vehicle recalls and recommended that the government take action if members fail to declare one when it’s required.

“Putting a penalty is a double whammy. It does not have any impact," said S. Sandilya, president, Siam. “We are not saying it need not be regulated. As a member company, we will be able to tell them to adhere to the guidelines in voluntary code." 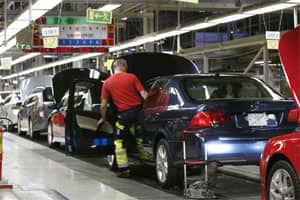 The Siam code will address potential issues that exist in a motor vehicle that fails to meet safety requirements because of manufacturing defects and the remedial actions taken in this regard. Vehicles will be covered for a period of seven years.

The industry moved towards adopting a voluntary code after the discovery of defects led many car makers to order recalls and sparked concerns in the government.

The voluntary code is a uniform framework for recalling vehicles and is applicable for cars, two wheelers and commercial vehicles. For CBUs (completely-built units) imported by member companies or independent importers, the concerned importer will be responsible for enforcing the code.

In case a manufacturer fails to announce a recall where “clear evidence" is available, the government can issue the appropriate directions to the company regarding the violation, Siam’s Sandilya said.

“The government has the prerogative to penalize us but we cannot recommend it," said Sandilya. “If the companies are not doing it then the government can go ahead and penalize them."

Sandilya said that Siam would examine the need for a mandatory policy if the government decides to frame one, although it would not oppose such a move. 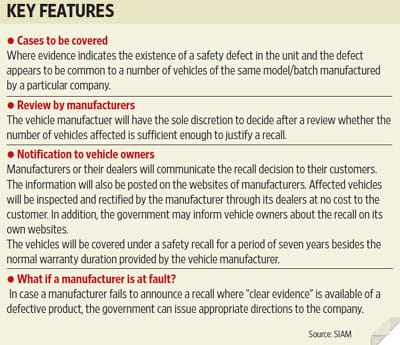 Typically, an auto maker makes an announcement offering to fix any defects and replace faulty components, but escapes penalties and punishment that are common in developed markets.

Rathore said that recall processes in the developed markets are so strong that they have changed the culture of the companies there.

“For example, in the US, the NHTSA (National Highway Traffic Safety Administration) keeps track of problems. If more people complain about the same issue, NHTSA can investigate and ask the company for a recall or it can even penalize them," Rathore said. “As a result, what has happened is that the companies have become more vigilant and the image about a recall itself has also changed. People are more than happy about the process."

Siam said the policy is applicable to all manufacturers and the decision on a recall will take into account the degree of seriousness or severity of any possible hazard.

If a company is of the opinion that there is a manufacturing defect that compromises the safety of vehicles, it will voluntarily rectify the problem free of cost. Also, companies are required to post information regarding recalls on their websites.

Siam has left it to individual members to decide on the minimum number of vehicles affected to constitute a recall and also whether to publicly announce such an exercise or not.