PepsiCo's board of directors elected Ramon Laguarta, who has been with the company for 22 years, to succeed Indra Nooyi as CEO

New York/Paris: Indra Nooyi is stepping down as chief executive officer (CEO) of food and beverage giant PepsiCo, handing the reins to a top lieutenant in a transition that will draw attention to the dearth of prominent female CEOs in corporate America.

Nooyi, 62, will leave the role in October and remain chairman until early 2019. Ramon Laguarta, 54, who has been a candidate to take over since a promotion last year to president, will be just the sixth CEO in the 53-year history of the company. 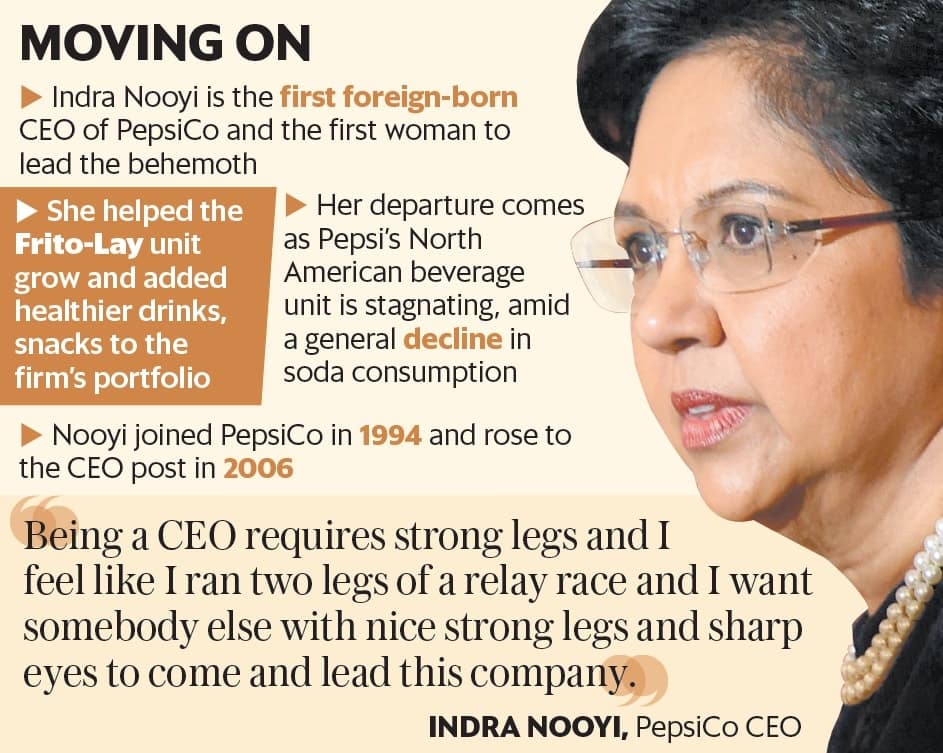 Nooyi is the first foreign-born CEO of Pepsi and the first woman to lead the chips-and-soda behemoth, whose revenue topped $63 billion last year.

Her departure thins the ranks of female CEOs running S&P 500 companies and comes at a time when Pepsi’s North American beverage unit is stagnating amid a general decline in soda consumption. In 24 years at Pepsi, including 12 as CEO, she has helped the Frito-Lay unit grow in a challenging industry and added healthier drinks and snacks to a portfolio that includes Cheetos and Mountain Dew.

“I’ve had a wonderful time being CEO, but at some point you sit back and say, look, it’s a responsible move to effect an orderly transition and to have somebody else take over the leadership of this company," she said in an interview. “Being a CEO requires strong legs and I feel like I ran two legs of a relay race and I want somebody else with nice strong legs and sharp eyes to come and lead this company."

Nooyi attended graduate school at Yale University and joined Purchase, New York-based Pepsi in 1994 as head of corporate strategy, rising to the CEO job in 2006. At the time a handful of women ran major US firms.