In yet another successful year of exits, private equity (PE) funds sold shares worth $1.17 billion in 2017 as their portfolio companies went public, data from Venture Intelligence shows.

Several PE investors such as Warburg Pincus, ChrysCapital, Kedaara Capital and others reaped successful exits or part-exits through IPOs of firms such as Au Small Finance Bank and Eris Lifesciences, thanks to the buoyant market.

“Given the buoyancy of the public markets and the liquidity in the system, IPOs seem to have become a favoured route for PE/VC investors to exit," said Prashant Gupta, partner & national practice head, capital markets, Shardul Amarchand Mangaldas and Co.

The Indian IPO market has seen a record year, with companies raising Rs65,923 crore till November, as compared to a total IPO fund raising of Rs26,493 crore in 2016. 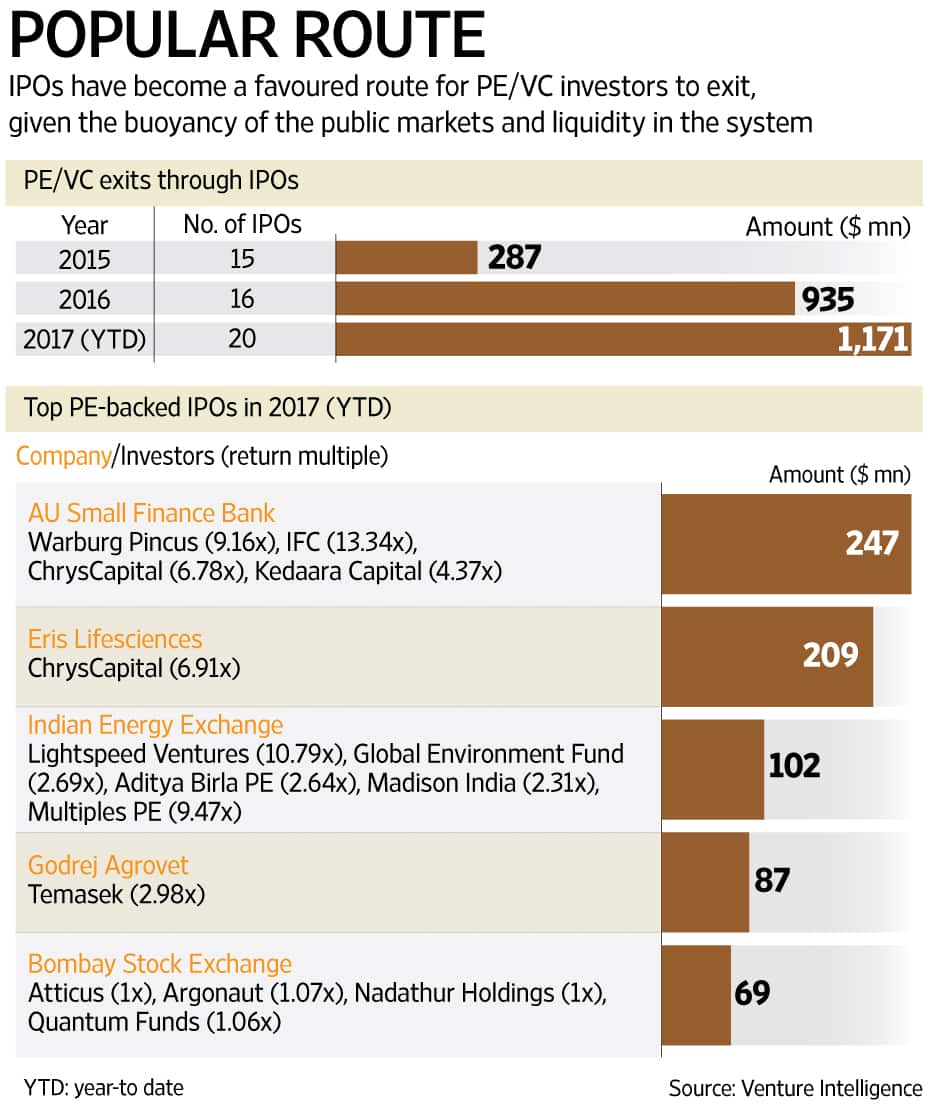 According to Sumit Jalan, co-head of India investment banking and capital markets at Credit Suisse, the attraction of IPOs as an exit route has significantly increased.

“Around 4-5 years ago, there was a trend of unlisted companies preferring private equity over an IPO to fund growth; now, as these private equity-funded companies have achieved more scale, we’re seeing them pursue public listings at a time when the equity market is at a record high and sponsors naturally prefer IPOs as an exit route," he said. Jalan said the IPO exit route has several advantages over other private market exit options.

“IPOs have typically been the most favoured exit route, unless a strategic sale can be managed. The key advantages of an IPO for a PE fund is that it enables them to partially sell down their holding, while continuing to participate in any upside and take advantage of favourable tax liabilities in the public market that may not be available in the private market," said Jalan.

The strong IPO market has also attracted PE funds owning majority stakes in companies to look at IPOs as an exit option.

“What has been interesting is that even companies that are majority-owned (or substantially owned) by PE/VC investors, have looked at IPO exits, rather than sales to a strategic (buyer) or merger with a larger company. For instance, Barings-owned CMS has filed for an IPO, as have recent IPOs by Prataap Snacks, where the PE/VC investors have themselves been named as promoters," said Gupta of Shardul Amarchand Mangaldas.

These factors have led to an increase in the contribution of IPOs to overall PE exits, from a 3% share of overall exits worth $9.95 billion in 2015 to about 12% share of $9.97 billion exits so far in 2017, data from Venture Intelligence shows.

Gupta added that while the buoyancy of the public markets and the continued reforms by the government—backed by the recent upgrade to India’s ratings by Moody’s—should continue to drive PE-backed IPOs, there could be some headwinds in 2018.

“As we get closer to the general elections next year, markets may be a bit more volatile depending on the nature of measures taken by the government ahead of the elections, as well as rising oil prices, which could put pressure on the fiscal deficit, thereby putting pressure on the public markets and valuations," said Gupta.