New Delhi: Tata Motors is looking to expand operations in Myanmar by assembling and selling buses and light commercial vehicles there, the head of its Indian operations said. 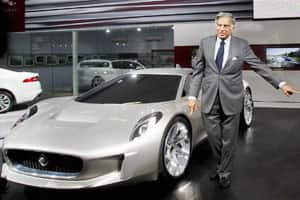 Ratan Tata, chairman, Tata Sons and Tata Motors, poses next to a Jaguar car during its unveiling ceremony at the 11th Auto Expo 2012 in New Delhi on Thursday. PTI photo

The political opening has accelerated since last year when Myanmar’s generals installed a new civilian government, released political prisoners and reached out to armed ethnic groups, but economic sanctions are yet to be lifted.

Tata Motors, whose range of cars extends from the ultra-cheap Nano, to British luxury brands Jaguar and Land Rover, is also looking at the potential for manufacturing cars in Thailand, Indonesia and Myanmar, Telang said.

The automaker sells its vehicles in Asia, Europe, Africa and South America.

Car sales have slowed down in its home country, hurt by rising finance rates and rising input costs.

India’s car sales, which grew 30% in the year ended March 2011, are expected to be flat in the current financial year.