India’s largest power generation equipment manufacturer’s latest such deal in the works is a joint effort with state-owned mineral trading company MMTC Ltd to import palm oil worth $1 billion (Rs4,510 crore) from Malaysia, the second largest palm oil producing nation, in return for setting up a hydropower project in that nation. 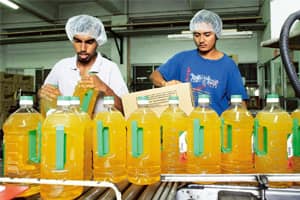 Give and take: Palm oil at Yee Lee Corp.’s factory in Ipoh, Malaysia. MMTC will import palm oil from the country in its tie-up with Bhel. Goh Seng Chong / Bloomberg

In counter-trade deals, countries exchange goods and services rather than pay in hard currency.

Mint had reported in September 2008 about Indian public sector firms evolving a joint mechanism by leveraging their competencies to get overseas projects or contracts.

Bhel and MMTC are in talks with the Malaysian government for the deal, said a Bhel executive, who didn’t want to be identified.

“We are in touch with Bhel for Malaysia. Bhel is going to negotiate for a hydro project in Malaysia and MMTC will get palm oil from there," said Sanjiv Batra, chairman and managing director, MMTC. “The quantity is not specific because the project size has to be decided and negotiated. But the project will not be (for) less than a billion dollars."

MMTC will procure palm oil over seven-eight years, he said.

The Malaysian embassy in New Delhi said it had “no knowledge about the said project". Questions emailed to Malaysia’s ministry of energy, green technology and water remained unanswered.

MMTC had a similar arrangement with state-owned Ircon International Ltd a few years ago in Malaysia, under which Ircon set up a railway line in that country and MMTC procured palm oil.

India, on an average, imports around 8 million tonnes (mt) of edible oil worth Rs26,000 crore every year.

“If we look from the food security point of view, we are heavily dependent on the import of edible oil. The additional import will bring down the prices, which are currently around $780 per tonne," said B.V. Mehta, executive director, Solvent Extractors’ Association of India (SEA). “The value of the (Bhel-MMTC) contract will translate into a palm oil volume of around 1mt."

Bhel is looking abroad for contracts as it fears its domestic market share may decline to 50% in five years from 60% now due to competition from local and foreign firms.

Bhel is also considering an opportunity in Sudan, for which the African nation has offered to pay back in crude oil.

“We’ve been talking to other state-owned companies in India to go together overseas," said the Bhel executive mentioned earlier. “For example, there are a lot of mining concessions overseas. While we can’t do mining on our own, we can set up power projects and help the other company to secure those concessions. Ultimately, such arrangements help the economy."

A commerce ministry official said Bhel and MMTC have signed a memorandum of understanding. On the prospects of the deal going through, he said it was a matter of negotiation. He declined to be identified.