If you travel by air or stay in hotels during your domestic jaunts, you are not a typical Indian tourist. The bus is the most common mode of transport and more people stay with friends and relatives during such trips than in hotels and guest houses, according to a National Sample Survey Organisation (NSSO) report. Air travel is almost negligible.

That said, most people are spending more on travel than they did the last time such an exercise was carried out in 2008-09.

What gets Indians travelling?

The NSSO survey, which was carried out in 2014-15, has two kinds of responses on the leading purpose of a trip—the reason without which the trip could not have been undertaken.

However, there is a difference in the manner in which responses have been collected for different purposes. For holidaying, leisure and recreation; health and medical tourism; and shopping, a recall period of 365 days has been taken. For business; social; religious and pilgrimages; education and training and “others", a 30-day recall period has been taken. Given the difference in methodology, the two cannot be compared. Therefore, we analyse the share of trips by leading purpose on the basis of the recall period used.

In both categories, about one in five households reported having gone on at least one overnight trip. 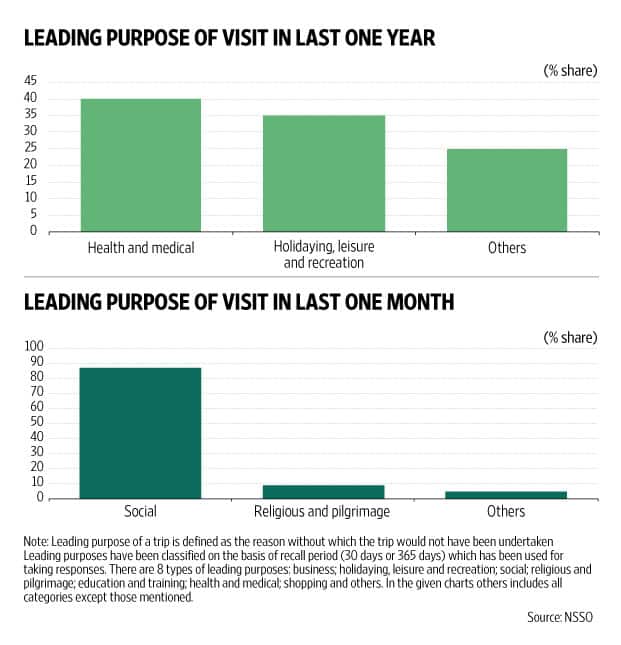 Information about trips for business, social reasons, religious, educational or other purposes was gathered with a 30-day time period in mind. Social trips accounted for 87.2% of trips made over the last 30 days in rural areas and 83.1% in urban areas.

A comparison to a similar survey carried out in 2008-09 shows that the amount of money spent has increased significantly for all kinds of trips. The biggest rise has been for shopping trips at 313%, followed by health and medical tourism (291%). 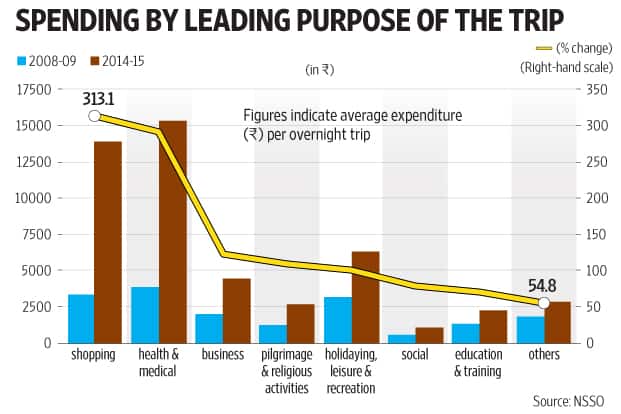 The most active state in terms of tourism is Kerala. Nearly one in two households (around 48.6%) in that state reported overnight trips in the last 365 days or the last 30 days before the survey. It was followed by Himachal Pradesh (48%) and Jammu and Kashmir (47.8%).

There is a surprisingly narrow gap between urban and rural India when it comes to domestic tourism.

There was no difference at an all-India level in the amount of travelling done by rural and urban households, the report said. It noted that both were equal in terms of reporting at least one overnight trip over the previous year for purposes which included leisure, besides health-related trips and shopping expeditions.

There were some state-level differences. In Assam and Jharkhand, there was more travelling reported in the urban belt than in rural regions. In other states such as Maharashtra and Andhra Pradesh, people in rural areas travelled more.

When they do travel, the bus is the most common mode of transport for India’s domestic tourists. This is true in both rural and urban areas. It accounts for 33.5% of travel in urban areas and 49.9% in rural areas. Trains and hired transport are the two other major modes of transport in both areas. Air travel is limited to 1.9% for urban and 0.1% for rural travel.

Travellers stay far more with friends and relatives than at hotels and guest houses. Those from urban areas are more likely to stay in hotels. The “others" category in includes railway stations, waiting rooms, health clinics, nursing homes—even tents.

The shortest kind of trips are those for shopping. They generally last two to three nights. Longer ones are those planned as leisure trips and last four days or more. The report noted that shopping trips happened in the winter. Religious trips and pilgrimages started in July and August.