Agalloping economy, young consumers, rising affluence and growing consumption—at a billion-plus, the Indian market is the dream place for any marketer to be in. Yet, they were never more unsure of casting their net wide in a booming market than they are today.

Two equally vigorous phenomena are spoiling the scene—brand proliferation, and the demise of mass media and the emergence of new technology. The result: consumers scattered across ever-narrowing niche media platforms, leaving marketers more confused than ever.

The death of mass media is a well-documented story. Before cable and satellite (C&S) television took off in India in the early 1990s, the Indian consumer had one recourse to entertainment—the state-run broadcast network, Doordarshan. While the consumer remained hugely underserved, life was easy for the marketers. One ad spot on a popular programme such as Ramayana or Rangoli (a show based on film songs) could help them reach 90% of television households.

Then came C&S TV, and a handful of channels such as Star Plus, Sony Entertainment Television and Zee TV followed.

Marketers embraced the newcomers enthusiastically, hoping they would help sharpen their urban and rural focus, and minimize the wastage in advertising spends. But the process of segmentation, which began then, has acquired a different dimension today.

Also, TV is not the only screen they access. They browse the Internet for information and entertainment, use their cellphones to connect with the community they operate in, play video games, read more newspapers and have access to more magazines than ever before. There are hundreds of radio stations vying for their attention, too. And, there is an ever-growing number of cafes, malls and multiplexes that offer out-of-home entertainment.

For the marketer, this revolution has meant redefining the art and science of targeting. The old wisdom gathered by their advertising partners hasn’t been of much help.

Even as they struggle to find ways and means of reaching out to their target audience, some eager minds are exploring newer means of catching the drifting consumer. Some, however, still see potential in further media penetration, and are helping many aspirants float new platforms. Gupta feels this untapped marketing wisdom and the platform these retailers ride on present a huge opportunity for firms to finally nail the consumer who has started giving prime time TV a miss.

“Organized retail in India is still a once-in-a-week or once-in-a-month phenomenon, whereas a neighbourhood shop is a place you are likely to visit once a day," he says. So, even as Indian industry goes gaga over organized retail, Gupta is busy targeting unorganized—rather, independent retailers—for brands which want to reach their end consumer in a more direct way.

LeagueOne Marketing Services Pvt. Ltd, the retail marketing outfit that Gupta floated in April 2007 after a successful 17-year sales and marketing stint in companies such as Motorola, Cisco and Nokia, now has a presence in 1,200 outlets in Delhi, Gurgaon, Noida, Bangalore and Punjab.

He plans to take this number up to 5,000 in the next four to six months. And what does Gupta do at these outlets? He designs and runs multi-level promotional and advertising activities for brands.

To start with, he has put up LCD screens at these outlets. While quite a few retail marketing outfits have caught on to the LCD phenomenon, LeagueOne airs not only regular ads, but also product information on brands.

Then, he runs various customized below-the-line promotional activities, such as organizing contests, providing danglers, posters and flags across the shop, in addition to providing “lead generation" services to brands.

“We partner with the ground staff to push our brands among consumers independently. This initiative is especially helpful in the case of new product launches," says Gupta. According to industry reports, independent retailers account for more than 90% of total retail billings. By 2010, their share is likely to go down to around 80%. But, he adds, “It will still remain a huge opportunity for brands to target consumers at close quarters." 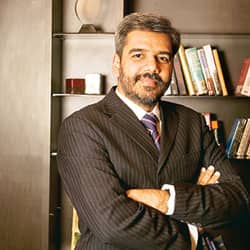 “India is a huge, diverse market. There is still a large section of the population that has no access to media of any kind. So, there are still many unexplored opportunities, and I don’t see the pace of action abating in the near future," says Salil. He runs MediaGuru Consultants, which provides an array of services to entrepreneurs wanting to launch new television channels or radio stations. It is soon going to launch a media audit practice that will help newspaper publishers examine and improve the quality of their content. He will be assisted by Ajay Upadhyay, a journalist and former editor of ‘Hindustan’, the Hindi newspaper published by HT Media Ltd, which also publishes ‘Mint’.

Salil himself has spent around 16 years in journalism. He was part of the team that launched India’s first 24x7 Hindi news channel Aaj Tak. In 2002, he was pulled in by C.M. Ibrahim, Union information and broadcasting minister in the 1996 H.D. Deve Gowda government, for the launch of his proposed channel, Falak.

“As the joint CEO of Falak, I travelled a lot to gather know-how on launching a channel. The markets I visited had a large number of channels, whereas in India, the industry was still too small," says Salil. It struck him then that the country would soon have many more channels. “ Overseas consultants charged a bomb for their services. I thought if I could provide these services within India at affordable rates, I would tap a big gap in the market," he says.

Falak never took off because it failed to get certain regulatory approvals, and MediaGuru Consultants was born in 2003. Today, Salil’s operations are spread across the US, UK and Singapore, with the headquarters in Noida, adjoining Delhi.

MediaGuru provides a gamut of services in the inception of projects, the logistics, and hiring and training of staff in television production, reporting and anchoring. It has launched two radio stations and six television channels. And, there are many more in the works. “The next three years will be defining for the industry. There might emerge some clarity on how much is too much," Salil says. 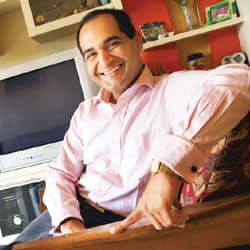 That Phadnis prefers freshness in everything he does is also evident from his designation at MediaE2E. He calls himself the chief evangelist. “I am an evangelist for change, for new trends and hence the designation," he says.

Phadnis started his career 14 years ago, as a media planner with Rediffusion|DYR, where he worked on big-ticket accounts such as Colgate, ICICI and Fiat. But it was creating new divisions, and working on new projects in places such as Starcom MediaVest Group and Television Audience Measurement (TAM) Media Research, that gave him a rush.

During his stint at TAM, Phadnis discovered the opportunity in multi-platform consumer search. While working closely with television networks, he realized that the advent of the conditional access system (CAS) and emerging distribution media such as direct-to-home (DTH), the Internet and Internet protocol TV would require new tracking devices. That was the genesis of MediaE2E.

He planned to develop tools for broadcasters and DTH companies as the overall analogue market was going digital, and the content had to go digital, too. “My friends used to tease me, (saying) that I would get withdrawal symptoms if they took my laptop or mobile away even a few metres," says Phadnis.

Almost a year later, in October 2005, his digital drive bore results. Phadnis managed to create a first-of-its-kind tool in India to aid the digital transition, particularly for large media organizations. “I have seen lots of elephants that can’t dance—large companies that are not able to move very quickly when the market changes," says Phadnis.

Phadnis is already working on the next level. He is in the process of creating something that “will revolutionize the way the media industry works". He refuses to divulge details, but says, “I wouldn’t touch it if it was ‘been there, done that’ already".

In the meantime, he has authored a book, ‘India Planning and Advance Broadcast Marketing’. Clearly, media marketing tops his priority list. 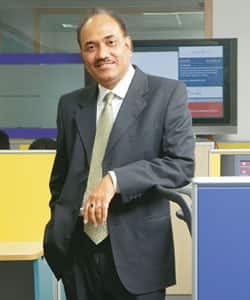 Here’s how it works: If you run a hospitality chain or an airline, for instance, SureWaves will deploy display screens for you in areas where you want to target consumers. The screens will enable consumers to access and download information on the availability of rooms in your hotel and even make bookings. Similarly, the airline can provide information on schedules and allow customers to book tickets, even pay for them. Retail, hospitality, transport, health care, banking and financial services, and government-run services are the verticals the company is targeting.

IndusEdge has signed up mChek India Payment Systems Pvt. Ltd, a gateway for payment solutions via mobile phones. These services will also be provided on mobile phones and the Internet. A network of such speciality screens will allow SureWaves to run ads on them as well.

RealView Media is the in-house unit that will create promotional content for SureWaves’ screens.

Before IndusEdge, Khare had co-founded Armedia, the technology firm that was snapped up by the US-based Broadcom Corp. for $67 million (around Rs291 crore), in 1999. Today, it ranks as one of India’s earliest start-up successes in the tech space. After a seven-year stint heading Broadcom’s operations in India, Khare quit to start afresh.

Khare says his work is his way of sending out a larger message that India needs to work hard on developing homegrown technology and manufacturing powerhouses. “We cannot bring prosperity to large populations through the services sector alone. We need to focus on manufacturing with an edge, and cutting-edge technology," he says.