HR is key to the global success of Indian firms

HR is key to the global success of Indian firms

When Nirmalya Kumar, professor of marketing, director of Centre for Marketing, and co-director of Aditya Birla India Centre at London Business School, places more emphasis on human resources than marketing, it does sound a tad surprising. 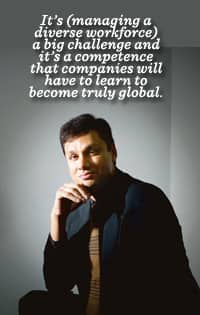 Need to know: Kumar says there is substantially less business literature on India than there is on China and Japan. Tessa Oksanen

Kumar’s conclusion is drawn from research for his latest book, India’s Global Powerhouses: How They Are Taking On The World, published by Harvard Business Press, which is set to hit the stands in April.

Kumar has taught previously at Harvard Business School, IMD (International Institute for Management Development), Switzerland and Kellogg School of Management, Northwestern University, and has advised a number of Fortune 500 companies. He is also the author of Marketing as Strategy (2004), Private Label Strategy (2007) and Value Merchants (2007). He is currently working on two books—The Future of Outsourcing and Wealth Creators.

In an interview, Kumar says Indian executives have traditionally been excellent in terms of optimizing resources, but have lost that skill in recent years. “Hopefully, we would rediscover that skill during this downturn." Edited excerpts:

Each one of the profiled companies has had interesting journeys in the road to becoming Indian multinationals. But if I have to pick one, it would be Essel Propack Ltd, a company unknown to me till early 2006, when I was invited to run a workshop for them.

It was then that I learnt that Essel Propack, led by Ashok Goel, is a world leader in laminated tubes with 32% market share and a supplier to consumer goods giants such as Procter and Gamble Co., or P&G, Unilever Plc. and L’Oreal SA. This revelation propelled me to find out if there were more companies like Essel Propack. The idea of writing a book on India’s global companies took shape right then and there.

The story of Essel’s evolution from a one-unit company in Vasind (in Maharashtra) to a global leader in laminated tubes is the story of evolving with a partner. Essel followed P&G wherever it went, and like most relationships, (this relationship) evolved through a series of accidents, opportunities and mutual gain.

Some of the companies that have the potential to become global powerhouses, but have not reached there, are firms such as leather accessories and goods maker Hidesign India Pvt. Ltd, Marico Ltd, TVS group and Bajaj group, among others.

What strategies have these companies adopted to transform themselves into world-class players?

Overall, most of them have taken the route of acquisitions to grow: Some have bought complementary assets to succeed in global markets, others to strengthen distribution network or sales. However, each profiled company chose very different strategies to have an international footprint. For instance, ArcelorMittal followed a consolidation strategy as it saw an opportunity in the fragmented steel industry—recognizing that national players would lose to a world leader.

A company such as Hidesign saw a huge prospect in the affordable luxury space. It fashioned itself as a niche brand, offering the luxury of a handcrafted bag at an affordable price. Bharat Forge made it big by way of speed and technology. It replaced unskilled workers with engineers on the plant floor, leading to a significant advantage in design capabilities and shortened product development to two-three weeks from an industry standard of 6-12 months.

How important has marketing been in their transformation journey?

Marketing did play its part but what really played a key role in the transformation of these companies was human resources and the way they are managing global talent. While a Singapore or Dubai (based) company has the capability to manage expatriate workforce, many Indian companies are still struggling with it.

The complexity of people management increases when businesses compete at a global level and successful companies need to effectively manage, engage and align their global workforce, which becomes exacerbated by geographical distance, time difference and language challenges as well as (the) demands of local culture, rules and laws. Companies such as Unilever and Nestle SA have a history of managing a diverse workforce, but many Indian companies do not have the experience since the big growth story has happened only in the last 10 years. It’s a big challenge and it’s a competence that companies will have to learn to become truly global.

What, according to you, are the reasons for acquisitions by Indian companies in recent years?

There are a few reasons for it. Companies, for one, realize that they need the scale to survive in an open market and succeed at a global level. Also, these companies have been large domestic players in the Indian market for some time. However, until recently they never had the confidence or the ability to take on the world. These companies are now increasingly seeking to secure the best of both worlds—access to the lucrative, high-margin markets of the developed world by owning companies in Europe and the US, while maintaining their low-cost bases in India. Indian companies also know that growing organically will take a long time, which they cannot afford.

You talk about the dual identity of Indians and non-Indians having to face Indians as customers, competitors and collaborators. How does it give us an edge?

I discovered this duality during my tenure in the US for 12 years. I would see, at the workplace, Indian executives (who) would behave and conduct themselves like Americans and outside work, they would retreat with other Indians, reverting to their own dress, eating Indian food and using Indian products. They are able to seamlessly move within these two worlds, unlike the Japanese and the Chinese. I think this is a huge strength be cause Westerners feel more comfortable with Indians. Therefore, you have many Indian executives present in businesses across the world, compared to Chinese or Japanese. However, Westerners do not seek to understand Indian business to a similar degree. Even in comparison to (the) other two Asian powers, China and Japan, there is substantially less business literature on India. We must have books on Indian business practices.

In a downturn, how does a company market its product/services? Is it a good time to enter the global markets and buy companies?

In a slowdown, volumes fall and pricing becomes more critical. Customers look for increased value from products, while companies need to be watchful of costs. Traditionally, Indian executives have been excellent in terms of managing costs and optimizing resources. However, in the last 15 years, we have lost some of that skill. Hopefully, we would rediscover that skill during this downturn.

If you have a clean balance sheet and capital reserves, it’s the best time to buy. In tough times, the entry barrier is price. If one can bring in ways to reduce costs and bring greater value to customers, then it’s a good time to enter markets.