The latest phones from two Chinese smartphone makers, but that is where the similarities end 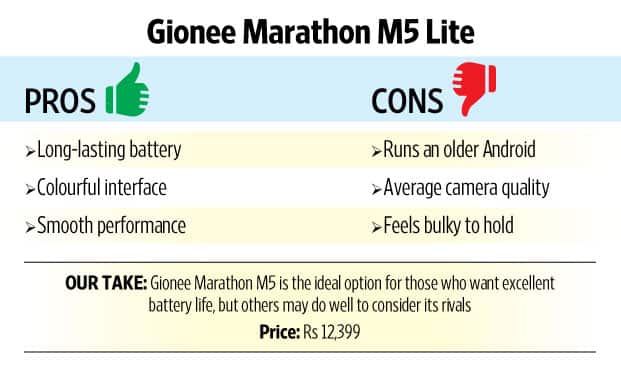 Gionee is one of the few phone makers who always focus on making devices with large capacity batteries, and the Marathon M5 Lite, which packs in a 4,000mAh battery is no different. It is priced at ₹ 12,399. The phone goes up in battle against the Xiaomi Redmi Note 3 ( ₹ 11,999) which also offers a 4,000mAh battery.

The Marathon M5 Lite is a hefty looking smartphone with a removable back cover, and it is made of solid plastic with a metal mesh on it. The other notable highlight is the metal frame on the side panel that offers a firm grip over the phone. Even though it looks good, one can’t really shrug off the feeling that it feels quite bulky (weighs 183g) for a 5-inch screen phone. The Redmi Note 3, which offers a bigger 5.5-inch screen (the M5 has a 5-inch screen) and a big battery, weighs only 164g. What tilts the balance further towards Redmi Note 3 is its finger-print sensor, which makes it more secure and allows users to unlock their phone faster.

The Marathon M5 comes with a 5-inch IPS display with resolution of 1280x720p. The display looks a bit dull in comparison to the screen of Redmi Note 3. What we like about M5 Lite’s screen is that it doesn’t become incomprehensible under bright light. Also, its wide viewing angles are good, which makes it perfect for reading mails and messages. The Redmi Note 3 not just offers a more vivid display, it is bigger as well, which makes it a better bet for gamers and movie buffs, in particular.

Performance: Handles most tasks with ease

Powered by a MediaTek 6735 quad-core processor with 3GB of RAM, the M5 Lite delivers a glitch free performance. Switching between apps, multi-tasking worked without any niggle. While it handled games such as NFS: No Limits without any hiccups, we noticed a slight stutter occasionally while playing FIFA 16: Ultimate Team. The good bit is that the phone remained cool even after 30 minutes of gaming. The phone offers 32GB of in-built storage which can be expanded to another 128GB. It comes with two micro SIM slots which supports 4G networks. The Redmi Note 3 has a slight edge over the M5 Lite as it runs on a more powerful Qualcomm Snapdrgaon 650 octa-core processor with 3GB of RAM, which offers a bit more headroom in terms of multi-tasking.

The smartphone runs Android 5.1, a two-year-old interface, with a layer of its own Amigo custom interface over it. Though there are not many additional features, it allows users to customise the interface with its rich inventory of wallpapers and themes. The Redmi Note 3 also runs on Android 5.1 but its interface looks a lot more stylish and it offers a lot of new features such as Child Mode, Lite Mode and the ability to hide certain files.

The M5 Lite’s 8-megapixel camera is a mixed bag. While colour looks rich and accurate, the slightest of zoom-in shows a significant amount of noise in the background. Also, one needs to tap on the focus multiple times to get it right. Gionee has added a number of extra modes to improve the picture quality, such as Pro mode, magic focus and HDR. Night shots are nothing special. They look mostly blurry. The Redmi Note 3’s 16-megapixel camera captures colour and detail much better in daylight. Its low-light results are mostly poor.

Powered by a 4,000mAh battery, the M5 Lite lasts over two days with ease, on modest use. This makes it ideal for users looking for a phone with a dependable battery. The Redmi Note 3 also comes with a 4,000mAh battery, which lasts a day and half at most.

The Gionee Marathon M5 Lite offers smooth performance, a genuinely long lasting battery and has good build quality. However, the Redmi Note 3 has a clear edge over it in terms of looks, a bigger and better display as well as a slightly better camera. The only niggle with Xiaomi is the availability: it is exclusive to Amazon.in and is available only occasionally through flash sales. The M5 Lite, on the other hand, is available on offline stores as well.