Kriti Sanon earns around 20 crore a year from brand endorsement deals, which is an interesting mix of both mass (Parachute Jasmine hair oil) and premium brands (Audi) 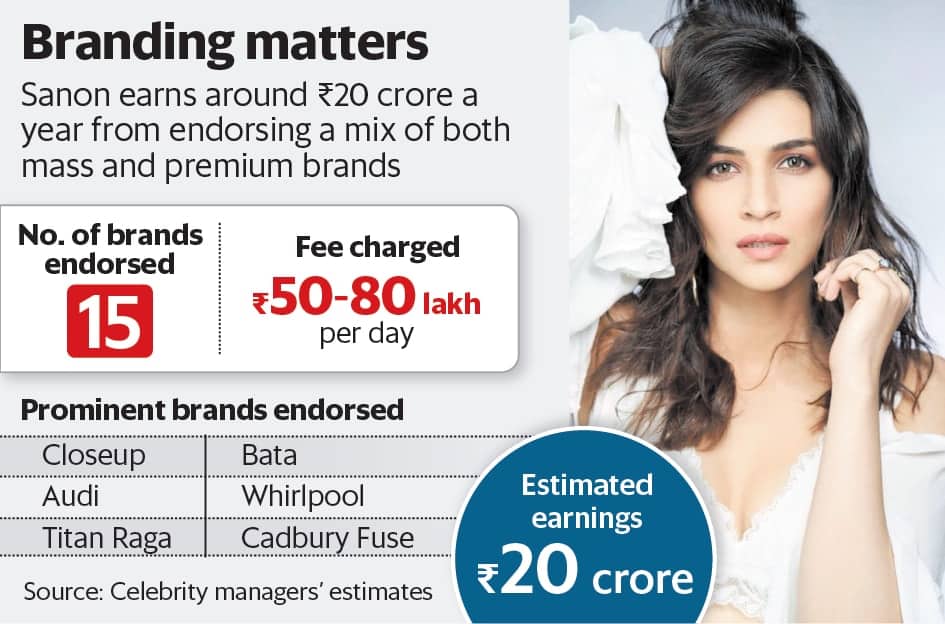 The 27-year-old model-turned-actor earns around ₹ 20 crore a year from brand endorsement deals, which is an interesting mix of both mass (Parachute Jasmine hair oil) and premium brands (Audi).

In the recent Bata ad, Sanon confesses she thought Bata was for the older generation and that she now stands corrected.

“Kriti is the perfect choice as she reflects Bata’s personality of being vibrant and authentic. She is easy-going with a high style quotient," said Thomas Archer Bata, chief marketing officer, Bata Shoe Organisation.

Sanon has a clean image with no controversies, making her appealing to a wider fan base.

The sheer variety of her endorsement deals also shows that the actor is not yet boxed into a particular type of image. She can, for instance, endorse a home-grown skincare brand, Boroplus, and simultaneously become the first Indian face of an international cosmetic brand, Faces Canada.

Sanon has also been promoting Mondelez’s Cadbury Fuse chocolates, which is targeted at Gen-Z (consumers born after 1995).

“Earlier this year, we brought Kriti Sanon on board, as her youthful, bubbly persona brilliantly blends with our brand’s proposition and we believe there is a very strong synergy between the two brands," said Anil Viswanathan, director of marketing, chocolates, Mondelez India.

Sanon is currently in talks to roll out her ethnic wear fashion clothing line.

Vijay Subramaniam, co-chief executive at entertainment marketplace Kwan Entertainment and Marketing Solutions, which handles Sanon’s brand portfolio, says that her decision to do a content-heavy film like Bareilly Ki Barfi at the beginning of her career will establish her as a serious actor. He also believes that the actor’s journey is that of an underdog who has worked her way up in the industry with no godfather.

“Her story is striking a chord with the Indian middle class, which also happens to be the biggest consumer segment in the country. Sanon’s appeal is across brand segments from premium (Audi) to a mass brand (Bata), which is a winning combination for brands," he added.

The Delhi girl started her journey with modelling before moving to Mumbai to take up acting full-time, debuting in 2014 with Heropanti.

The actor received critical acclaim for her last project with director Ashwiny Iyer Tiwari, Bareilly Ki Barfi, where she plays a feisty young woman from a small town in Uttar Pradesh with big aspirations. She has also worked with director Rohit Shetty in Dilwale with A-list stars such as Shah Rukh Khan, Kajol and Varun Dhawan and Raabta with Sushant Singh Rajput. Her forthcoming projects include Arjun Patiala (with Diljit Dosanjh), Housefull 4 (with Akshay Kumar) and Panipat (with Sanjay Dutt and Arjun Kapoor).