‘My Name Is Khan’ to unleash marketing blitz

Mumbai: As news of actors Shah Rukh Khan and Kajol ringing the opening bell of the Nasdaq stock market in the US on 1 February spreads, their latest movie, My Name Is Khan, is looking set to become one of Bollywood’s most advertised movies. 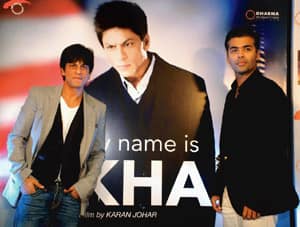 Going global: An August photo of actor Shah Rukh Khan (left) and director Karan Johar at a news conference to announce a distribution deal with Fox Star Studios for ‘My Name Is Khan’ in Mumbai. Manav Manglani / Reuters

The movie’s marketing budget was in excess of Rs25 crore, an advertising executive involved with the promotion of the movie said on condition of anonymity.

Co-produced by Khan’s Red Chillies Entertainment Pvt. Ltd and Karan Johar’s Dharma Productions Pvt. Ltd at an estimated cost of Rs55 crore, the film deals with the 9/11 terror attacks in New York and their impact on an Indian Muslim living in the US. It will be released globally on 12 February.

Fox Star Studios, which brought the Hollywood 3D blockbuster Avatar to India recently, has bought the marketing and distribution rights for My Name Is Khan, reportedly for Rs100 crore.

Vivek Krishnani, head of distribution, marketing and syndication at Fox Star Studios, said the marketing blitz had been kicked off across 70 countries by booking time for the film’s trailer via Star Television Network Ltd.

In India, print ads have been booked in all leading publications. More than 1,500 billboards have also been booked.

“Shah Rukh Khan will soon make a guest appearance on the popular game show Bingo on Colors (TV channel)," said Krishnani. The actor will also meet winners of a competition, in which people will relate their extraordinary love stories, in Delhi, Lucknow, Ahmedabad and Indore.

“For Shah Rukh Khan, a lot is at stake—both personally and professionally," said Sanjay Bhutiani, former chief executive, BR Chopra Films. “While Aamir Khan has had a series of successes, Shah Rukh Khan’s last few movies such as Billu Barber and Dulha Mil Gaya haven’t performed as well at the box office. The new film offers him an opportunity to connect with non-Asians because it’s centred around 9/11."

Krishnani declined to comment on the marketing budget, but?claimed?My?Name Is Khan’s “brand participation" was one of the biggest in Bollywood.

Dish TV India Ltd, Bharti Airtel Ltd, Century Plyboards (I) Ltd, Reebok International Ltd, Samsonite Corp., Makemytrip.com and Kyazoonga.com are some of the brands associated with the film. Samsonite and Reebok are part of in-film placements, while others have created co-branded commercials.

“My Name Is Khan is pumping in much more money on promotion than any regular Bollywood grosser," said GroupM India Pvt. Ltd’s managing partner Hiren Pandit. “In that sense, it’s a first."