New Delhi: India’s cricket board chose two new franchises for the Indian Premier League (IPL) in a bidding contest on Tuesday, replacing a pair of teams suspended over a 2013 spot-fixing and betting scandal and netting between ₹ 340 crore and ₹ 360 crore in auction proceeds.

Delhi-based mobile phone maker Intex Technologies and Kolkata-based New Rising, owned by CESC Ltd chairman Sanjiv Goenka, became the latest companies to join IPL, the ninth edition of which will be played from 9 April to 29 May.

The two teams were decided through a ‘reverse bidding’ process, which was to determine who will seek minimum central revenue from the BCCI. Central revenue is the amount paid by the BCCI to each franchise, currently estimated at ₹ 65-70 crore and likely to rise to ₹ 75 crore for the upcoming season.

Both opted to forego payment from the BCCI. They will replace Chennai Super Kings and Rajasthan Royals, suspended from the tournament after being implicated in the scandal that marred the IPL’s 2013 edition.

“The reverse bids show the popularity of IPL. BCCI gives central revenue to all franchises, which is expected to go up to ₹ 75 crore. These new teams will take no money from BCCI and will put in additional money that they have bid for," said Rajeev Shukla, chairman, IPL. 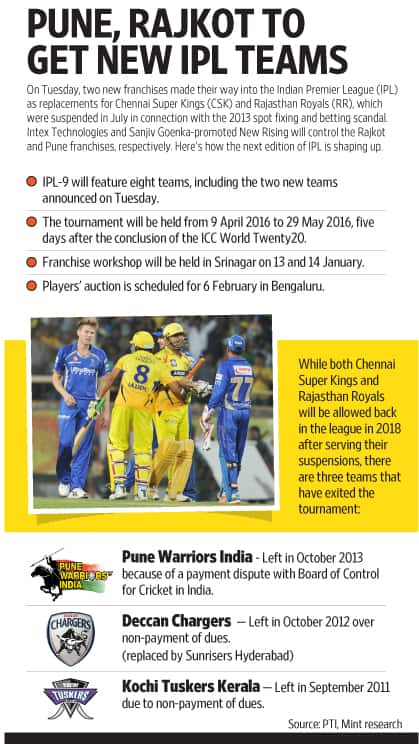 The BCCI’s revenue stands to increase by nearly ₹ 180 crore, explained its president Shashank Manohar. “If you calculated the amount, what we had calculated was that the BCCI pays them approximately ₹ 70 crore out of the central revenue. First year, it would be ₹ 70 crore, and the next year it would be ₹ 75 crore. So that makes it ₹ 145 crore for one team. Now that ₹ 145 crore is going to be the same because they are not accepting the central revenue plus they are paying us ₹ 25 crore, so ₹ 50 crore more. That’s the simple calculation."

This means that the BCCI stands to gain ₹ 290 crore simply by exemption of central revenue by the two franchises. The two teams, by foregoing the right to any amount from the BCCI, in turn, contribute a combined ₹ 52 crore for the next two years. That comes up to a minimum of ₹ 342 crore. The BCCI also said that 21 companies in all purchased the bid document or the so-called invite to tender (ITT).

Only five showed up for Tuesday’s bidding. Technically, it confirmed, all bids were good, meeting all the guidelines. Besides Intex and New Rising, other companies that bid for the two new teams included Chettinad Cements (which bid ₹ 27 crore each for Chennai and Pune), Axis Clinicals ( ₹ 15 crore for Nagpur, ₹ 15 crore for Kanpur and ₹ 10 crore for Pune). RPG Properties, promoted by Harsh Goenka, failed with bids of ₹ 17.88 crore for Pune and ₹ 20.88 crore for Rajkot.

‘No conflict of interest’

Immediately after New Rising won the bid for the Pune franchise, there were murmurs of a possible conflict of interest involving Goenka and former India captain Sourav Ganguly. Ganguly is part of a consortium that co-owns the Atletico de Kolkata (ATK) franchise, part of the the Indian Super League (ISL) football tournament.

Launched last year, the ISL is modelled on the IPL’s franchise-based format.

However, Manohar ruled out a likely conflict of interest scenario, saying, “According to me, it does not, because this is a transparent bidding process. Firstly, these two games are different. The conflict of interest means that where there could be an obvious bias with regard to the decision-making process. When a person can influence the decision-making, then only there would be a conflict. You can’t stretch conflict to absurdity levels."

The teams are clearly not expected to break even in the two years they will be participating in the IPL.

Bansal suggested that the priority for Intex would be to “minimize losses". He said, “The idea would be to minimize losses. Obviously, for every team management, the idea is to generate maximum revenue and make it profitable. We will have the best of senior management looking at this analytics."

Indranil Das Blah, chief operating officer at Kwan Entertainment and Marketing Solutions, said the two new teams were not looking at this investment from a “profit and loss" standpoint.

“Their lens is completely different. It’s a branding and marketing vehicle for their brands. Owning an IPL franchise gives you unparalleled visibility and brand recall which no other sports or entertainment property can give," he said.

Their participation in the IPL, Blah added, “could also be to make way for a long-term association with the BCCI or the IPL itself. IPL has been looking to expand teams. The plan was to start this year with 10 teams. So, in that context, both Intex and New Rising would be front-runners in terms of understanding the workings of the BCCI".

The two owners, however, said that they associated themselves with the IPL because of their “passion" for the sport.

If everything goes to plan, India’s one-day team captain Mahendra Singh Dhoni, who has captained Chennai Super Kings, could well end up with the Pune franchise for the upcoming season.

As per the terms mentioned in the ITT, the team that bids the least gets the right to pick the first of five players from the two suspended franchises, in a draft auction to be held next week in Mumbai. The other players who can be picked by the two franchises include Ajinkya Rahane, Ravichandran Ashwin, Brendon McCullum and Ravindra Jadeja.

The total salary cap for an individual franchise is ₹ 66 crore, confirmed a BCCI official.

Sanjiv Goenka said he had bid for the Kolkata franchise years ago, but was trumped by actor Shah Rukh Khan, whose bid was only “marginally higher".

The group had interest in IPL for a “long time", he added.

Goenka said unlike his ISL football team, the cricket franchise will be fully owned by his own enterprises. There are at least three other partners in his football team.

Pune appeared to the most promising among the options available from the commercial standpoint, Goenka said. It will offer “significant opportunities".

Aniek Paul in Kolkata contributed to this story.