The mood of India’s ultra-high net worth households (UHNHs) seems buoyant, and the confidence that built up around the hope of economic recovery is reflecting in their investment and spending pattern.

The number of such households in India rose 17% to 137,100 in financial year (FY) 2015, compared with 117,000 the previous year, according to the Kotak Wealth Management’s Top of the Pyramid 2015 report released in Mumbai on Tuesday. Kotak Wealth defined UHNHs as those households that have net worth of at least 25 crore.

The report is based on a survey and analysis of over 225 ultra high net worth individuals (UHNIs) across 12 Indian cities. The survey was conducted between February and May this year, and categorises UHNIs into three segments—inheritors, entrepreneurs and professionals.

According to the report, the combined net worth of UHNHs is estimated to have increased to 128 trillion. It estimated that the net worth will grow at a compound annual growth rate (CAGR) of 26% to 415 trillion by financial year 2020.

Here is a look at how these households chose to not only invest their money but also spend it.

Out of the overall allocation of income, 54% went into savings and investment, and the rest into expenses.

Allocation to equity increased from 38% in FY14 to 45% in FY15, whereas debt investment declined to 20% from 24% for the same periods. “Asset classes such as equity are evoking better interest from UHNHs. Financial asset classes look better than traditional asset classes," said C. Jayaram, joint managing director, Kotak Mahindra Bank Ltd. 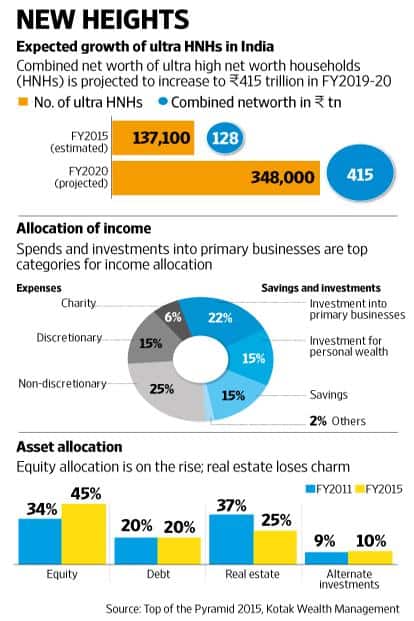 Numbers indicate that UHNIs are now placing more confidence in financial assets. “The participation in equity in general has seen significant traction. This is due to two factors. One, the political formation has given a lot of confidence to people, and two, so far, people were under-allocated in equity. UHNIs are usually defensive by nature. But now their confidence has increased," said Prateek Pant, executive director, products and services, RBS Private Banking. “We expect domestic participation to continue. Though the focus was towards large-cap, there is a growing interest in other areas too," he added.

In contrast to the increased interest in equity, real estate as an asset class has lost attraction. Investments in real estate by UHNHs declined from 29% in FY14 to 25% in FY15, according to the wealth report.

“High net worth investors have become more wary of the residential segment, and we are looking at a scenario where good commercial assets will be more attractive to them," said Anuj Puri, chairman and country head, JLL India. “Over the next two quarters, rental yields for commercial properties will rise perceptibly and those who invest now will also be able to garner good capital appreciation over the next three years. The residential segment has lost a lot of its previous sheen for big investors, with the exception of Bengaluru and Pune," he added.

While there is still interest in the residential asset class, both luxury and affordable housing have fallen off investors’ radar for now, said Puri.

UHNHs that were part of the study also considered investments in high-growth sectors such as e-commerce and logistics. “There is investment interest in the e-commerce space," said Jaideep Hansraj, senior executive vice-president and head, wealth management and priority banking, Kotak Mahindra Bank.

Of the overall income, 46% went towards various types of expenses—25% on non-discretionary expenses, 15% on discretionary, and 6% on charity.

Topping the list of where money was spent was jewellery (18%) and apparel (15%). Of the UHNIs who participated in the study, more than half (53%) said they preferred Indian branded jewellery while almost one-fourth (24%) said family jewellers. Only a small portion, 9%, said they opted for world renowned jewellers. “The reason why UHNIs prefer Indian brands is because they see value here and also that pieces can be customised," said Saurabh Gadgil, chairman and managing director of Pune-based jewellers P.N. Gadgil.

Investment trumped passion when it came to why the jewellery was bought. Almost one-third on the UHNIs—33%—said they bought jewellery for investment. Only about one-fourth said they bought for pleasure. “Those who are buying for investment don’t look at the design. Their focus is on lower making charges and maximum value. But those who buy for consumption go for high-quality stone-studded jewellery," said Gadgil.

Apart from gold jewellery, many UHNIs (40%) also prefer diamonds. “We are seeing a growth in this high-end segment. UHNIs prefer high quality stones in their metal. For instance, if it is traditional jewellery, the quality of kundan and polki in it matters a lot. This type of jewellery is usually bought for weddings," said Sandeep Kulhalli, vice-president, retail and marketing, Tanishq at Titan Co. Ltd. “A lot of traction can be seen for special diamonds too. UHNIs give special attention to the cut and make of the stones," he added.

Another important expense, according to the report, was children’s education. While entrepreneurs and inheritors preferred to send their children abroad for studies, 41% of professionals were inclined towards choosing Indian institutes. The US and the UK were the most favoured destinations. Quality of education, global exposure, and safety were the key selection drivers.