London: British newspapers proudly hailed a spectacular opening ceremony to the 2012 London Olympics, with the Times leading the way on Saturday by calling it ‘The Greatest Show’. 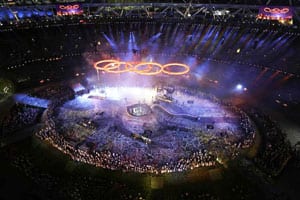 The Guardian described it as a ‘Night Of Wonder’ on their front page while the Daily Telegraph’s banner headline was ‘Going For Gold’.

Britain’s Queen Elizabeth declared the Games open after playing a cameo role in a dizzying ceremony designed to highlight the grandeur and eccentricities of the nation that invented modern sport.

A film clip showed doubles of the 86-year-old monarch and James Bond actor Daniel Craig skydiving towards the stadium and, moments later, the queen made her entrance in person.