The advertisements for Idea 3G Smartfone are set in what’s supposed to be heaven and use humour to highlight the benefits of the phone. The ads slightly tweak the company’s traditional tag line to say An idea can change your afterlife. With temperatures rising across India, four of the remaining positions in the top 10 index were cornered, predictably, by soft drink advertisements. Among drinks, PepsiCo Inc. and Coca-Cola Co. shared two positions each in the ad reach index that measures awareness and brand recall among consumers. Coca-Cola’s Maaza fruit drink won two spots, while PepsiCo’s Slice fruit drink and Pepsi were featured in the index.

The only other advertisement in the top 10 index was Tata Docomo’s Photon Max.

The top-ranked Idea 3G Smartfone ad scored 85 points on the ad reach index for April, while the No. 2 ad of the same company scored 80. That compares with the 71 points that Sprite’s top-ranked advertisement scored in the preceding month. 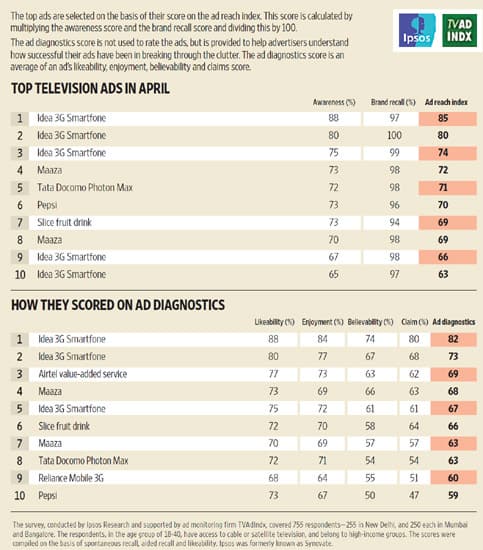 An Airtel value-added service commercial (ranked third) and a Reliance Mobile 3G ad (ranked ninth) were the only entrants in the diagnostics index that were not featured in the ad reach index.

The survey polled 755 respondents from high-income groups in New Delhi, Mumbai and Bangalore.

Actor Abhishek Bachchan is standing at the doors of heaven. The gatekeeper asks him who he is. Not recognizing people is an old idea, responds Bachchan. The new idea? Idea 3G Smartfone, with Google Goggles and other “heavenly" apps. “Sirji, deadly idea sirji," exclaims the gatekeeper. What else is there? “Aage aage dekho, jannat hai ji (Wait and watch, there is a paradise out there)," says Bachchan, as he enters heaven. Tag line: An idea can change your afterlife.