Mumbai: Sachin Tendulkar stands at the heart of a real life drama on Saturday which would be rejected as impossibly contrived if suggested to any director in the flourishing film industry of his native Mumbai. All roads have led to the Wankhede Stadium in Tendulkar’s home town for the first all-Asian World Cup final between the two best teams in the competition.

India transcended the dizzy expectations of their demanding supporters to defeat Pakistan in Mohali on Wednesday after overcoming four-times champions Australia in the quarter-finals.

Sri Lanka’s progress to a third World Cup final has been clandestine by comparison but they have done nothing to dispel pre-tournament assessments that they are the strongest all-round side in the competition.

In a further theatrical twist, the final will also feature the man ranked by the Wisden almanac as the leading spin bowler in the history of a sport described by Ashis Nandy in “The Tao of Cricket" as “an Indian game accidentally discovered by the British". 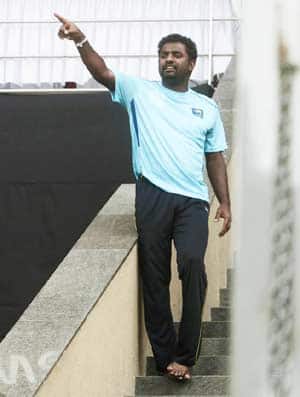 While Tendulkar has still to play the innings which will complete a century of centuries, Muralitharan has already defied the laws of probability in both his final test and his last match on home soil.

The weight of expectation place what would appear unbearable pressures on Tendulkar, who has not been able to live a normal life at home for the best part of two decades.

He has remained outwardly unaffected and, if anything, his fierce commitment to his craft and his resolute self-discipline, is greater now than at any time his career.

But Tendulkar is now 37 and, although he has given no hint of retirement, there seems no possibility that he will play in another World Cup.

Muralitharan, who turns 39 next month, has a more immediate concern. He retires from all international cricket after Saturday but first he must ensure he takes the field after struggling with knee and hamstring injuries during the latter stages of the tournament.

“Chances are good that Murali will play," coach Trevor Bayliss told reporters at the Wankhede Stadium on Thursday. “He completed 10 overs in the semi-final and, such is the character of the man, he will play even with discomfort."

Despite their towering reputations, Tendulkar and Muralitharan will still be characters in a drama greater than the fate of any individual on Saturday.

Several of their colleagues could sway a game which pits Tendulkar’s explosive opening partner Virender Sehwag against the searing speed of Lasith Malinga.

Sri Lanka captain Kumar Sangakkara is as effective in any form of cricket as he is elegant while India’s opening bowler Zaheer Khan is equally dangerous at the start, middle or end of an innings.

India defeated a West Indies side thought to be unbeatable in the 1983 World Cup final, a victory which led to the explosion in the popularity of one-day cricket on the sub-continent. Sri Lanka came of age as a cricketing nation in 1996 with their win over Australia in the final.

In 2011, either team would be a worthy champion.