The chink in Google’s ad armour

It’s hard to quibble with the continued success of Google’s advertising business. Already the dominant company in the $200 billion annual market for web and mobile commercials, Google parent company Alphabet Inc. padded its advertising revenue by about $12 billion from 2015 to 2016. That means in a single year, Google found new business that was equivalent to half of Facebook’s total yearly sales. But there is a potentially dark cloud in Google’s sunny skies. 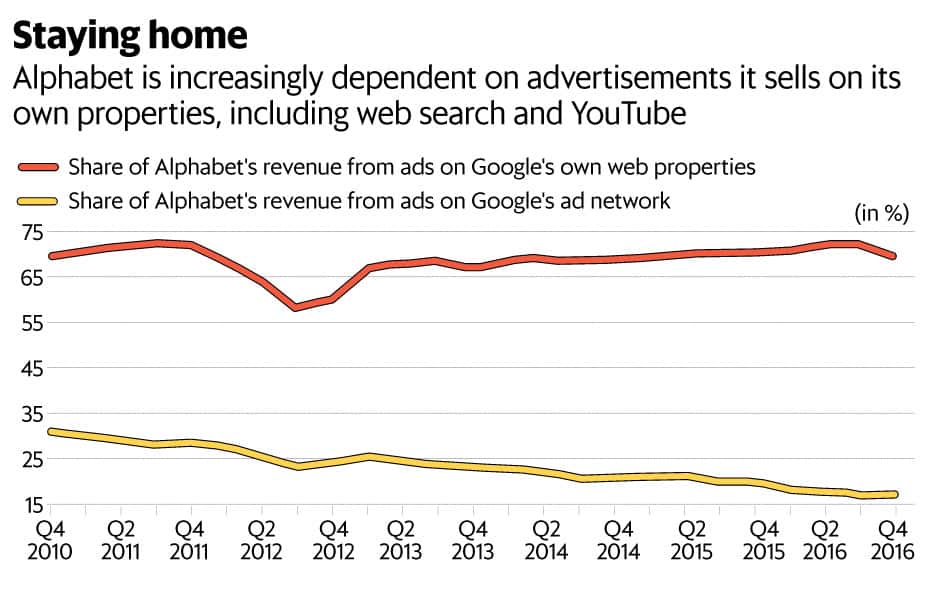 About 70% of Alphabet’s total revenue last year came from the ads that the company sells on its own digital properties, including Google web search pages, YouTube, Gmail and Google Maps. The rest of Google’s advertising revenue comes from the company’s role as a middleman for ads all over the web and mobile devices.

Revenue from the ad network rose 4% in 2016, while ad sales on Google’s websites and apps rose 22%. The slower growth of Google’s ad network means it is accounting for a smaller and smaller share of the company’s total sales. In the fourth quarter of 2016, Google’s advertising network generated 17% of Alphabet’s total revenue, down from 22% three years earlier.

The reasons for this are complicated. Digital advertising is changing. More ad sales are entirely computerized, pushing down the average prices for each ad and pinching Google’s growth in its advertising network. The digital advertising business is growing more concentrated; a larger share of industry revenue is coming from ads sold on the websites and apps controlled by two companies, Google and Facebook Inc.

Right now, though, the soft spot in Google’s advertising network sales is no big deal. Google is more than making up the difference with prodigious growth in ad sales on its own websites. 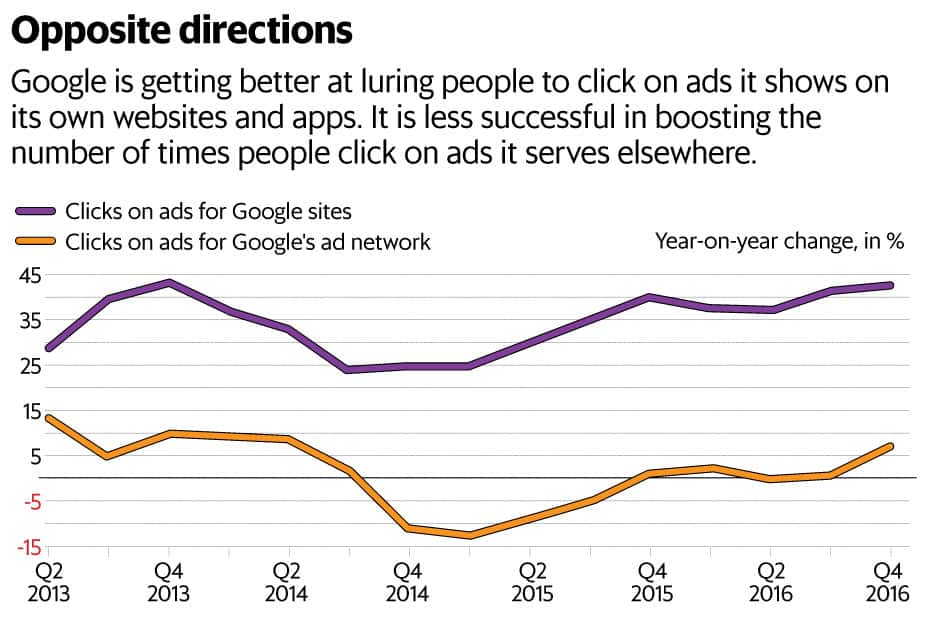 But in Google’s worst-case scenario, it faces every Internet company’s worst fear: it could turn into Yahoo Inc.

Yahoo in its heyday had the most popular hangouts on the web, including its home page. And it had at the time the leading technology for serving up banner ads to the millions of people who used Yahoo as the front door to the Internet. Then, Yahoo’s Internet stardom faded. And its technology didn’t keep pace with changes in online advertising. The combination of failures meant dependence on ad sales from its own websites proved painful as those Internet visitors moved to other sites and to their smartphones.

That’s not to say Google will follow Yahoo’s path to Internet ignominy. Google is the best Internet ad machine ever created, with the best technology to harness untold reams of information about people’s habits to feed into it. But the relatively slow growth of Google’s advertising machine away from its own digital walls do leave the company potentially vulnerable.

If search, YouTube, Google Maps and other company properties fade in popularity, then Google will have fewer digital billboard spots to apply its advertising prowess. Technology changes quickly and can turn today’s Internet stars into tomorrow’s Internet losers. Google’s advertising strength in its web homes could someday become its dystopian nightmare.