New Delhi: Deccan Chargers, the champions of second edition of Indian Premier League (IPL), is unlikely to feature in the next edition of the cash-rich league which may force the Board Of Control For Cricket In India (BCCI) to lookout for a prospective buyer in the next few days. 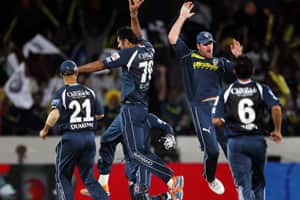 In June, the Deccan Chronicle group had appointed Religare Capital Markets Ltd to advise it on selling of Deccan Chargers following approach “by multiple parties evincing interest in acquiring stake in the company’s IPL team".

However, according to investment banking sources, financial liabilities of the franchise owner pushed away the prospective buyers and the matter has been intimated to the cricket board.

The formal announcement will come within a few days but the BCCI is likely to get a suitable replacement as many business houses are interested in buying a team.