With these rights, the airline also becomes the sponsor of all third umpire decisions presented on giant television screen during games. Such decisions are made when neither of the two umpires on the ground can conclusively make a call on an appeal against a player. 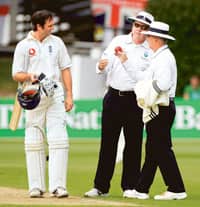 Umpires confer during a 13 March Test match between England and New Zealand in Wellington, New Zealand. Kingfisher’s branding of umpires will include its logo on their shirts and hats

Kingfisher Airlines’ parent, Mallya’s UB Group, is already the owner of the Bangalore team, Royal Challengers, while Kingfisher Airlines is also the official airline partner for IPL and an associate sponsor for the Delhi Daredevils team.

“We want to make sure brand’s visibility extends across every platform and take up every opportunity during the cricket league," said Malhotra.

So far, the BCCI has signed deals worth some Rs4,332 crore in partnerships.

We are still signing more partners which will be announced as we go along," said Sunder Raman, chief executive, IPL. The DLF IPL will start on April 18th with the first match being played between Shah Rukh Khan’s Kolkata Knight Riders and Mallya’s Royal Challengers of Bangalore at the Chinnaswamy Stadium in Bangalore.