The mind and matter of spiritual aesthetics

In 1945, Nakashima (with two other architects Antonin Raymond and Francois Sammer) completed the first reinforced concrete building in India. Called Golconde, it continues to be a dormitory for members of the Shri Aurobindo’s ashram in Pondicherry. One of the finest examples of 20th century modernist style architecture in India, it displays a beautiful blend of Japanese and Indian sensibilities and is built specifically with local climate conditions in mind. If Golconde is one of Nakashima’s contributions to India, the nation’s contribution to his design philosophy has been evident in the much articulated spiritual bent of his oeuvre thereafter. A creative bent that gave him a special place in the phalanx of memorable architects and designers of the last century. 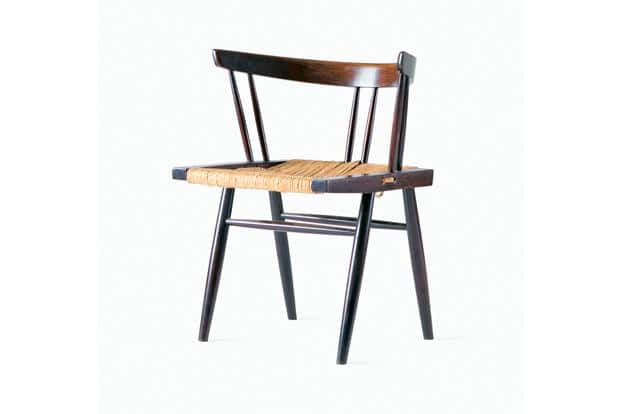 Nakashima’s relationship with Ahmedabad began a few years after the time he spent at Shri Aurobindo’s ashram, where he was re-christened Sundarananda: one who finds joy in beauty. At NID, many American and European designers were part of its early history, contributing to its overall vision and pedagogic direction. Gira Sarabhai, one of the founders of the institute invited Nakashima to design and make furniture for the young institute. He sent detailed drawings and in November 1964 spent three weeks in Ahmedabad crafting them in the institute’s wood workshop. Of the 32 pieces that Nakashima made as part of this contract, some were adapted from older designs and some made especially for the purpose. NID retains 26 pieces including chairs, benches, tables, ottomans, lounges, daybeds, shelves and mirror frames. These were made for sale up till the mid-1970s and after the production ceased, the pieces remained in its offices, auditoriums and archives. “They are the living history of NID," says Tanishka Kachru, a member of faculty of exhibition design at the institute and curator of Nakashima’s exhibition.

About 20 of the designer’s classics are currently on display at the exhibition, including an elegant, three-legged Mira Chair that he first created as a high chair for his daughter so she could sit at the family table. There’s also the strong but remarkably light Grass-Seated Chair and the low-set Kornblut Chair, designed with sensitivity to Indian floor-seating culture. The austere pieces embody Nakashima’s signature craftsmanship. He believed in retaining the natural wood grain instead of hiding it and built with traditional Japanese woodwork techniques that kept the joinery visible. It is imperative to consider these details in the context of the time and place when Nakashima was designing. It was a time when hand-craft techniques were phasing out and mass producing, industrial design practices were taking root.

In combining craftsmanship with some amount of standardization, using technology to enhance the work of the human hand, in building with the local cultural context in mind and retaining the inherent beauty of his chosen material, Nakashima set down his own personal and progressive version of modernism. His legacy to NID is not just in the physical presence of these furniture pieces but in guiding the institute’s overall vision at a time when it was finding its own voice.

The launch of this exhibition was accompanied by a symposium held at NID on 21 October. It was attended by Nakashima’s son, Kevin Nakashima, and his daughter, Mira Nakashima-Yarnall, a woodworker herself, who spoke about her father’s work and life. “My father’s first encounter with Indian culture, spirituality and materiality was when he first went to Pondicherry in 1936. It was, I believe, the powerful memory of his life-altering experience in India which made him eager to again engage in building something beautiful in India at the first invitation of Gira Sarabhai in 1950," said Mira.

In 1981, Nakashima wrote a book. The Soul of a Tree: A Master Woodworker’s Reflections is his commentary on techniques of woodworking, but more importantly, it lays down his philosophical approach to life and design. He writes about the moral value of working with trees and of man’s oneness with nature. He professes his kinship with the material and a craftsman’s skill to identify the innate beauty of a tree and to bring it out in an external form, to give it a second life, one that is beautiful, artistic and long-lasting. In the pages of this book—sometimes subtly and sometimes overtly—emerges a notion consistent with that of Shri Aurobindo’s Integral Yoga. Nakashima brought that ethic and aesthetic to modern design and architecture, and his pieces currently on display at NID are an example of that philosophy.

The Free Edge is on at the Design Gallery, NID, Paldi Campus, Ahmedabad, till 21 November between 4pm and 8pm.