‘Sanju’, and the anatomy of the Raju Hirani brand of movies

Raju Hirani's everyman credo has been one of the most bankable things the Hindi film industry found in the 2000s, and it rests not on stars or opulence, but writing

Mumbai: Sanju is Rajkumar Hirani’s fifth film and first biopic. It is also his first film that is not directly about India or Indianness. Hirani’s Everyman credo has been one of the most bankable things the Hindi film industry found in the 2000s, and it rests not on stars or opulence, but writing. He succeeds in making audiences laugh at the prejudice and duplicity ingrained in Indian society without being massy like Manmohan Desai. 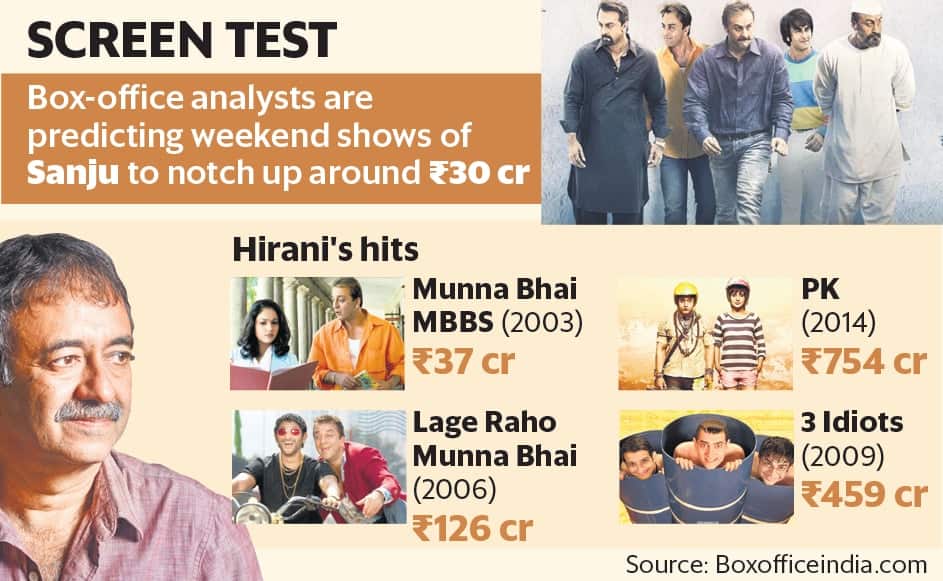 Sanju is about actor Sanjay Dutt, the lead actor in his first film Munna Bhai MBBS (2003). Hirani had expressed the desire to make a film on Dutt’s life long ago. With this film, besides giving actor Ranbir Kapoor the opportunity to revive his box-office mojo, Hirani and his co-writer and long-time collaborator Abhijat Joshi try to make the misadventures of a sheltered, pampered boy from Bollywood aristocracy stumbling into manhood relatable, entertaining cinema. From the trailers, it is obvious he is taking the broad brush.

In a few days from now, we will know whether his pan-India pulse works again at the box office—all his films, Munna Bhai MBBS, Lage Raho Munna Bhai (2006), 3 Idiots (2009) and PK (2014) were smash hits that broke box-office records. The total worldwide numbers of these films were staggering: ₹ 37 crore, ₹ 126 crore, ₹ 459 crore and ₹ 754 crore, respectively.

Mint reported this week that Fox Star Studios, which is distributing the film, has used an interactive, social-media driven marketing campaign that targets the bulk of the Indian audience for whom Dutt is from an earlier generation. Box-office analysts predict weekend shows to notch up around ₹ 30 crore. Vijay Singh, CEO of Fox Star Studios India, says the distribution strategy for Sanju has been to go as wide as possible and reach out to every movie-going audience. “In India, we are releasing in over 4,000 screens while internationally it will be released in over 1,300+ screens in 65 countries. It is the widest release for any Rajkumar Hirani-Vidhu Vinod Chopra film till date," Singh says.

Hirani is no longer judged on style, scale or experimentation. He, as Singh puts it, “stands for wholesome family entertainers with an underlying message". Critics and audiences love him equally, and he has worked with the same team since his first film—in the safety net is his producer Vidhu Vinod Chopra. Before the release of PK, Hirani said in an interview that style and craft were irrelevant to him as long as every scene mattered.

The Hirani brand is ultimately about those writing tricks, and how they build up to propel one big idea. Even with all the fortifying strategies of marketing, distribution and a team that knows his idiom well, it will be a test for Hirani if he has changed the direction of his writing for Sanju.