'The Accidental Prime Minister' review: A film ostensibly about Manmohan Singh becomes a well-timed attack on the Gandhi family

Sanjaya Baru was media advisor to Prime Minister Manmohan Singh from 2004 to 2008. He later wrote a memoir about this stint called The Accidental Prime Minister, on which Vijay Ratnakar Gutte’s film is based. In his first scene, Baru, played by Akshaye Khanna, turns up in purple jacket, green shirt, blue tie and black trousers. As if this isn’t disruptive enough, he then addresses the camera directly, and continues to do so through the film. I first thought of Kevin Spacey’s asides in House of Cards, but a better fit is the 2015 film The Big Short, another fourth-wall-breaking, multi-character comedy about large, corrupt systems.

It takes little time for The Accidental Prime Minister to start talking about what it’s really talking about. In a scene shortly after the 2004 general elections, before Singh (Anupam Kher) is appointed as prime minister, Rahul Gandhi speaks to his mother, Congress president Sonia Gandhi, in Italian, so the gathered ministers don’t know what’s been said. The charge against Sonia was always that she wasn’t from India, but it’s significant that the one line in Italian in the film is given not to her but to Rahul. After Sonia declines the post of prime minister, the film contrasts the eloquent reaction of Priyanka Gandhi with the confused, incoherent one of Rahul. Barely 10 minutes in, the film’s already asking the question.

It takes about an hour before someone says it outright. “Yeh election Rahul ke bas ka nahin hai". Rahul’s not up to this election.

Now, you can argue that it’s the 2009 general elections being referred to, that Gandhi was green then. But let’s not kid ourselves. In a couple of months, another national election will be upon us. Rahul Gandhi is the face of his party. The Accidental Prime Minister is an invitation for audiences to see him as comical and indecisive and a little foreign. It’s a political ad. 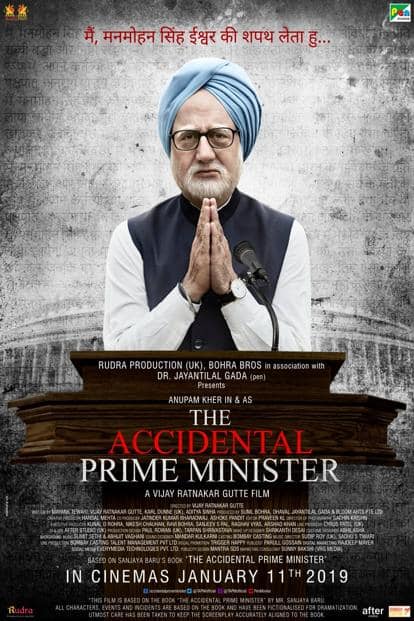 This is a slice of propaganda so blatant that it may as well have been made by the ruling party. Kher is a BJP ideologue and is married to a party MP. The day the trailer released, the BJP’s official handle tweeted it, saying “Was Dr Singh just a regent who was holding on to the PM’s chair till the time heir was ready?" It is, of course, only natural that the party would promote a narrative in which the opposition comes out looking silly. But it’s dispiriting to see the film industry be so obliging.

Kher playing Manmohan Singh is excellent Trojan horse casting: once he’s inside that voice and that unthreatening manner, he can slowly undermine him while appearing to be sympathetic. It’s a sly performance, with the actor subtly turning Singh’s light voice into a meek bleat and exaggerating his halting speech patterns. The impression is of an ineffectual man in the grip of the Gandhis, unable to control his party. It’s difficult to argue with the general accuracy of Kher’s imitation, but great acting is more than mimicry. There’s little empathy for Singh in Kher’s portrayal, only pity.

You know you’re clutching at straws when the most impressive thing about a film is the hair and makeup and casting. All the actors playing real-life politicians, from LK Advani to the corpse of PV Narasimha Rao, really do look the part. There are no songs, thankfully – I don’t think I would have survived a montage of Singh looking pensive as a sad Punjabi number plays on the soundtrack. The background score is so overbearing and all-pervasive you have to wonder if the composers are being paid by the second. Its jaunty rhythms match the parodic mood of Khanna’s performance – a turn better suited to a production with writing on the level of Yes Minister and not a slightly better Indu Sarkar. In a way, the crudity of technique is only fitting. The Accidental Prime Minister was always going to be a hit job on the Gandhis first and a film second. Suzanne Bernert looks startlingly like Sonia, but doesn’t make any attempt to humanise her, turning her into an expressionless villain. A vampiric-looking Indira, her hand in a strange hook shape, glares down from a portrait. Arjun Mathur’s Rahul is feeble and confused – damaging enough considering he’s in the running for prime minister, but made even worse by the fact that his main opponent is also in cinemas this week.

In Uri: The Surgical Strike, Prime Minister Narendra Modi – played by Rajit Kapur – is shown as decisive and calm under pressure. He gets to say “Jai Hind" while signing off on a covert military mission. Gandhi, on the other hand, tears up his own party’s ordinance. You realise by the end that the film’s title is a warning. It’s saying: Manmohan Singh was the right man for the job. The real accident will be electing Rahul Gandhi as prime minister.

Uday Bhatia is an assistant editor and film critic at Mint Lounge based in New Delhi. He also oversees the 'How To Lounge'/Culture section.
Read more from this author
Catch all the Industry News, Banking News and Updates on Live Mint. Download The Mint News App to get Daily Market Updates.
More Less
Topics
mint-india-wire
OPEN IN APP