Bollywood: How nepotism fares at the box office

All eyes are now on Dhadak to see whether star lineage is a sure-fire success formula at the box office. The movie features Ishaan Khatter, half brother of actor Shahid Kapoor, and late actor Sridevi's daughter Jahnvi Kapoor

New Delhi: Actor Kangana Ranaut’s comment on nepotism in Bollywood on Karan Johar’s chat show last February, sparked a nationwide debate. The nepotism debate in the film industry has been stoked again with Johar’s own romantic musical production Dhadak, which releases on Friday.

Then what explains Bollywood’s obsession with launching star kids? “The thing with star kids is that they are known before they are known, so they are newcomers who are not really new and the film becomes more marketable," said filmmaker Vikram Bhatt, who has directed star children such as Faisal Khan, Emraan Hashmi and Aditya Narayan in their debut films. 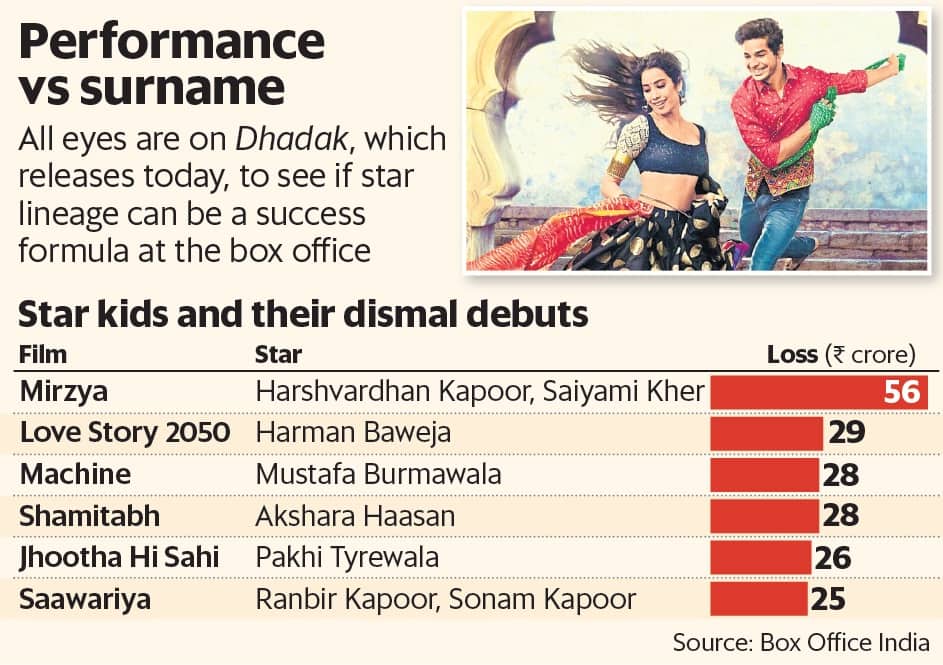 Without doubt, the single-biggest advantage of launching a star kid is ready buzz and curiosity around the film, eliminating the need to spend much on marketing.

While enough star kids in the past have proven that sitting equity in the form of an easily available movie debut doesn’t translate into a successful career, brand expert Saurabh Uboweja said the likes of Alia Bhatt, Ranbir Kapoor and Varun Dhawan have now proven that delivering consistently can also ensure people eventually forget where you came from.

Also, enough people without film family connections have made it big to prove that privilege hardly matters beyond a point. “Look at people like Ayushmann Khurrana or films like Sonu Ke Titu Ki Sweety that worked with an entirely unfamiliar cast," said film trade and exhibition expert Girish Johar. “What star kids may get is a couple of extra chances but ultimately it all boils down to talent when public time and money are at stake."