Pond&#8217;s White Beauty campaign | Getting noticed by being on the spot

What they did: The Hindustan Unilever Ltd, or HUL, team wanted an outdoor campaign that could best convey Pond’s White Beauty’s brand proposition. The company already had a television commercial, or TVC, running that showed an artist painting a woman’s portrait. With each passing day as she used Pond’s, the artist corrected the blemishes in the portrait. After seven days, the woman’s face in the portrait was spotless. 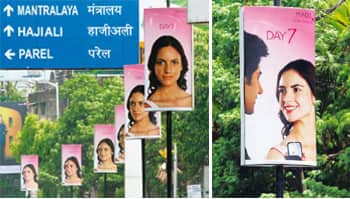 The outdoor campaign had to complement the TVC, visibly reflect the cream’s action and show the audience the difference after seven days.

Therefore, in HUL’s brief to Ogilvy, the brand proposition was highlighted clearly. “The brief was to adapt the message to the medium by executing the outdoor creative innovatively to bring alive the proposition of ‘reduces dark spots and lightens skin in just seven days’," says a company spokesperson.

With this objective, OgilvyAction came up with the idea of using eight kiosks placed on consecutive street lamp posts, with a picture of a woman’s face imprinted on the first seven. On the first, representing Day 1, the woman’s face would have blemishes and dark spots. The next kiosk, representing Day 2, would have fewer spots—and so on. On Day 7, she would be seen with no spots, visibly lighter skin and being proposed to.

The last kiosk would show the product, brand name and offering.

How they did it: After many brainstorming sessions, the agency decided to run a teaser campaign in Delhi, Kolkata, Mumbai and Bangalore. The campaign showed a big spot on a hoarding covering most of a model’s face. The copy read, Spots always get noticed. This was later revealed to showcase the model’s face with a glowing complexion.

In May, the kiosk initiative was activated in Mumbai’s high-traffic locations, such as the Juhu SNDT stretch, Fame Adlabs stretch on Link Road (Andheri), two stretches on Marine Drive, Worli’s Century Bazaar and Poonam Chambers. About 48 kiosks were used.

The campaign primarily used kiosks, supported by a couple of innovative billboards at bus shelters, centre medians and mall facades. “Kiosks are generally used as salience builders (enhancing parts of a larger campaign), but if the creative idea lends itself to storytelling, then kiosks can be used effectively. Hence, kiosks were chosen as an apt medium to convey the message," said Nabendu Bhattacharyya, president, OgilvyAction, in an email.

The agency introduced lighting on the back of kiosks to achieve the right glow and cream impact. The campaign ran for approximately five weeks, till end-June.

The result: The agency says that since the campaign has just ended, the dipstick survey that measures approximately how many eyeballs the kiosks generated has not yet been gathered. However, Bhattacharyya claims that the feedback from HUL, the media and consumers spoken to, has been positive.

What the experts say:“What happens usually is (that) brands use stills of their television commercials or duplicate their print ads as their outdoor campaign, and this is not always a good idea because every medium has a purpose, and unless this purpose is utilized appropriately, the whole idea behind the ad is lost," says Harish Bijoor, chief executive officer, Harish Bijoor Consults Inc., a marketing consultancy firm.

“This is something which differentiates the Pond’s campaign because they have used the outdoor medium as a medium and the whole campaign plays out beautifully and effectively," he adds.