Thanks for Visiting Mint
You seem to have an Ad Blocker on. Please turn it off in order to continue, or whitelist Mint
HOW TO TURN OFF AD BLOCKER
OR
REFRESH IF YOU ALREADY TURNED OFF THE AD BLOCKER
Home >Industry >Media >Virat Kohli vs Sachin Tendulkar: Comparing the numbers

Is Virat Kohli really as good or better than Sachin Tendulkar?

After his century in an Indian Premier League (IPL) match last weekend, there was a renewed chorus from some commentators and fans comparing Virat Kohli with Sachin Tendulkar.

Is Kohli really as good or better than Tendulkar?

Going purely by batting averages, he has done better than Tendulkar in the shorter format of the game, including one-day internationals (ODIs) and IPL. Tests tell a different story.

It is difficult to compare men of two different eras even if their eras somewhat overlap. No statistical exercise can definitively prove that one player is better than the other. Conditions vary with place and differ more so with time. Then there are other factors. Were the grounds larger then? Are the bats bigger now? What about the fact that Kohli never faced someone of the calibre of Wasim Akram and Curtly Ambrose and so on. But numbers can throw up interesting facts, which if nothing else, can arm a fan better the next time a cricket debate breaks out. The chart traces the evolution of Kohli’s average over the 163 ODI innings he has played so far. This is then compared to how Tendulkar’s average evolved match-by-match over the same number of innings.

Both were off to relatively slow starts. However, Kohli dominates. Tendulkar’s average hovers around 40 or below. Kohli’s average is mostly over the 40 mark and frequently in excess of 50.

But then the game too had evolved from a more even contest between bat and ball, to one dominated largely by the bat. The introduction of free hits and other big-score friendly innovations seems to have tilted the game in favour of the batsman, besides the improvement in sporting facilities and support systems.

What about the format which has remained relatively unchanged through the years? Kohli has played 72 Test innings so far and scored nearly 3,000 runs. Tendulkar scored nearly 300 runs more than Kohli (3,284 compared to 2,994) by the time he played the same number of innings. His average was also higher. A fairer comparison may be to the batsmen of their own generation. Kohli’s 72 Test innings were divided into seven periods. His average during each period was compared to the median average of the batsman who played between the start of the first and last innings in each segment. Players who batted after number seven were removed so that results are not skewed by tail-enders.

Tendulkar outperformed at the 50th percentile mark. This means that he scored more runs than 50% of batsman at all times when he was at the same stage in his career as Kohli. He scored between 2 and 49 runs more than the median test batsmen per innings. 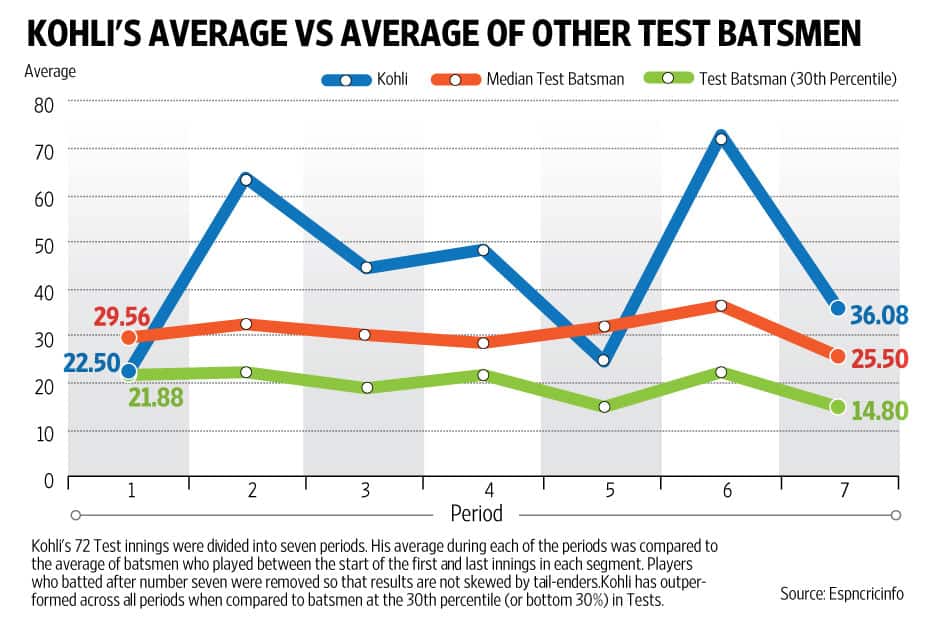 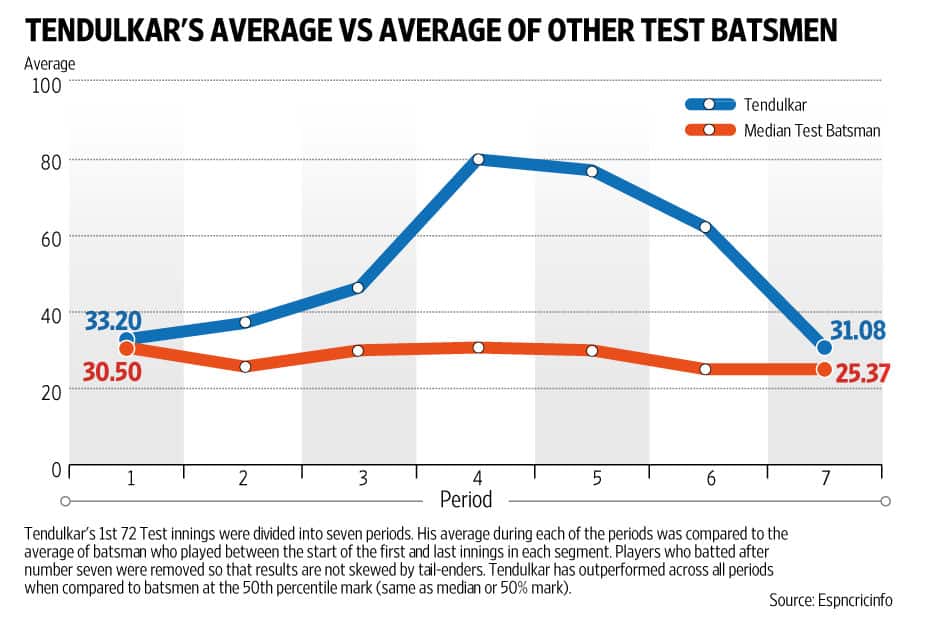 But when we do the same exercise for ODI careers, Kohli outperfomed the median batsman in all seven. He scored between 13 and 38 more runs per innings than the median ODI batsman. He also beat all batsmen at the 80 percentile mark. This means that he outscored 80% of ODI batsmen all of the time. Tendulkar also outperformed the median batsman at all times when he was at the same stage as Kohli. 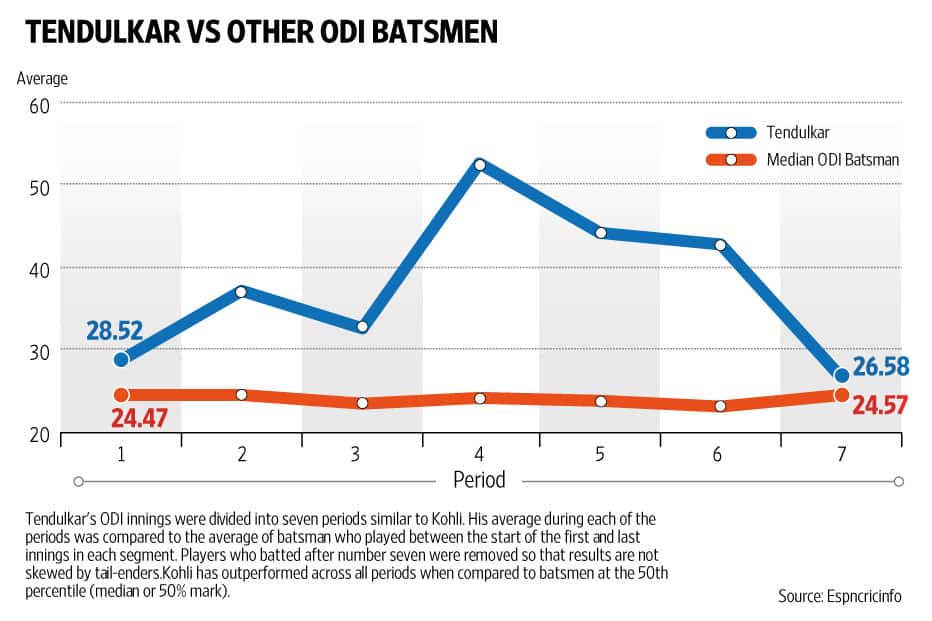 Tendulkar averages higher in matches that India won in both formats of the game. Kohli has done better in ODIs but his winning average is lower than his overall average in Test matches. 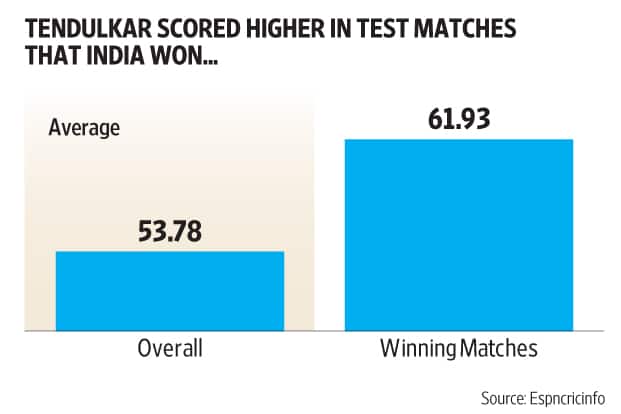 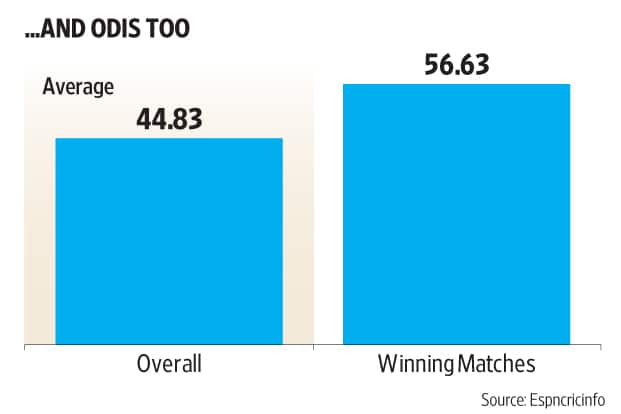 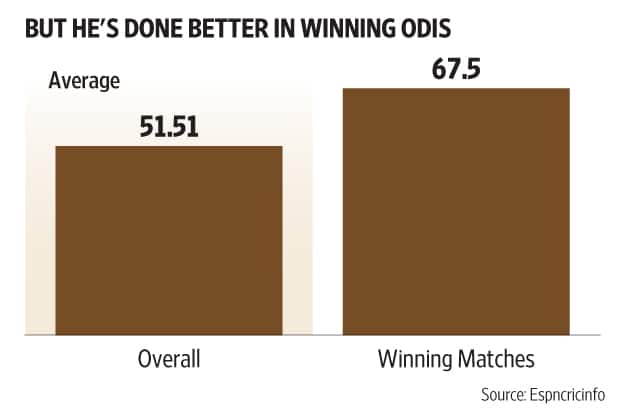 One major failing of Indian batsmen, traditionally, has been batting on quick and bouncy pitches outside the subcontinent. How do the two compare?

Kohli has, however, done worse in away matches in both ODIs and Tests. Tendulkar averages lower in away ODIs, but slightly higher in Tests. 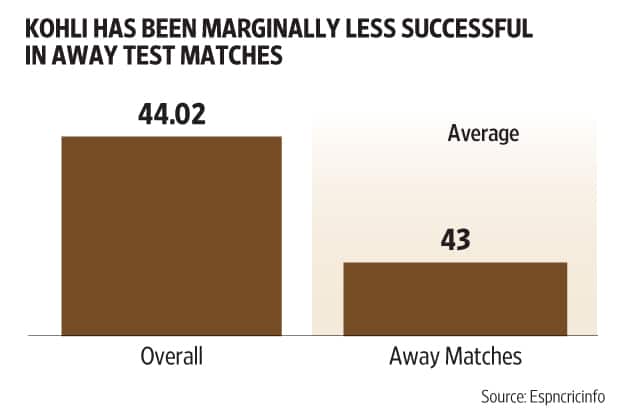