A pair of TV commercials by JWT for Lay’s chips, featuring actor Ranbir Kapoor, topped both the ad reach index that measures brand awareness and recall and the ad diagnostics index that rates commercials on softer features like likeability, enjoyability and believability, in the Mint-Ipsos-TVAdIndx survey for advertisements in February, a month in which the cricket world cup began.

In the first ad for Lay’s, the official snack of the International Cricket Council (ICC) Cricket World Cup 2015, a professor, played by Bollywood actor Pankaj Kapur, is taking a morning chemistry class. A student throws a note to her classmate (Ranbir Kapoor), telling him the ICC cricket match is at 9am. Ranbir Kapoor distracts the teacher with packets of Lay’s chips while the rest of the students slip off to watch the match. 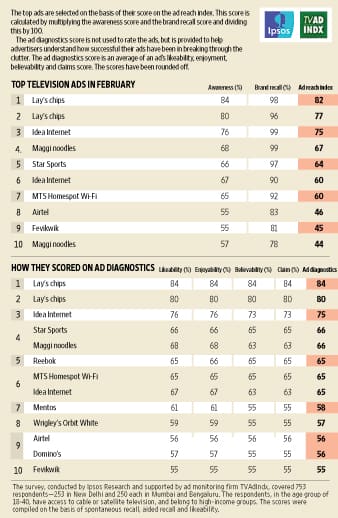 The second ad is a variation on the same theme, this time in an office setting.

Two ads each for Idea Internet (Nos 3, 6) and Maggi 2-Minute Noodles (4, 10) figured on the ad reach index in February. A commercial for the Star Sports channel, the official broadcaster of the ICC Cricket World Cup, grabbed fifth place, with MTS at No.7, Airtel at No.8 and Fevikwik instant adhesive at No.9.

Commercials for snacks, fast food companies and chewy mints were a hit on the ad diagnostics index as the world cup beckoned couch potatoes to the TV set. Besides the two ads for Lay’s chips in the first two spots, the list featured Maggi (it tied with the Star Sports ad at No.4), Mentos mint (No.7), Wrigley’s Orbit White chewing gum (No.8), and Domino’s pizza (it tied wiith Airtel at No.9).

An ad for Idea Internet took the third position, and another for the same brand tied with MTS for the sixth spot. Ads for Reebok sports shoes and sportswear, featuring clips of Indian cricket captain M.S. Dhoni exercising, took the fifth position, and Fevikwik, at 10th, rounded off the ad diagnostics index.

Addressing a problem that most Indian cricket fans faced during the world cup—inconvenient timings—the ad shows Ranbir Kapoor stuck in a morning office meeting. He gets an SMS from his colleague, also in the meeting, informing him that it will be impossible for them to catch the 9am match. Kapoor opens a pack of Lay’s chips and distracts his boss while everyone sneaks off to watch the match.

The ad features a teenager talking about how he does not want his college to decide the subjects he has to study. He says he will make that decision—and picks economics and biology. The Idea Internet Network (IIN) on his phone ensures that he can study subjects from different streams simultaneously. He proudly proclaims he is from IIN Tamil Nadu.

A girl named Rajkumari (princess) is teased at her new school because of her name. She comes home irritated and angry with her mother and refuses to eat. When her mother says she is making Maggi noodles, the daughter asks for her “special" Maggi. While she’s eating, her mother asks why she calls this recipe “special". The daughter says a special can’t be called anything else—her mother gently makes the point that a princess cannot be called anything else either.

The ad opens in 1992. A Pakistani cricket fan, watching a world cup match between India and Pakistan, hoping for a win and waiting to celebrate, ends up disappointed after Pakistan lose. The wait over the years has been so long that he now has a son, who follows in his father’s footsteps and waits for a win. They sit with a box of crackers, hoping to celebrate, only to return it to storage for the next world cup. Hope rises again as another world cup comes around.