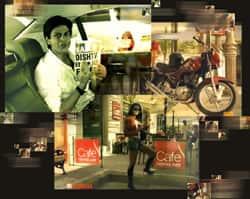 Two’s company: When the co-branders are siblings, as in the case of Dish TV and DNA, the benefits are twofold. Courtesy www.iBankLive.com

Of course there must be synergies between the co-branders. “The target group for Yamaha Alba and Café Coffee Day was the same, so it made sense to come up with a joint promotion," says Pankaj Dube, national business head, India Yamaha Motor Pvt. Ltd. Dube says the company has been warmed by the response to its new offering, the Rs97,425 Yamaha R15, which is being promoted at Café Coffee Day outlets since its June launch.

And when the co-branders are siblings, as in the case of Dish TV and DNA, then the benefits are twofold. Anjali Malhotra, vice-president for marketing at Dish TV in the Essel Group, says that it was a conscious decision to publicize a group company since the theme demanded a newspaper to be shown. “Wherever possible, we try to bring synergies between the group companies," Malhotra says.

The picture-in-picture approach is becoming most common and beneficial in the case of brands associating themselves with movie promos. There are times you think you’re seeing a movie trailer and suddenly a logo for a TV brand appears, or vice versa. Navin Shah, chief executive for P9 Integrated Pvt. Ltd, says that ad rates for entertainment promos are subsidized and hence such cross promos are eagerly sought by brand marketers. “The ad would attract rates which are subsidized by as much as 50-70% as the promo would be considered entertainment," Shah says.

With increasing censorship, this stealth technique could also benefit categories that face ad restrictions. K.V. Sridhar, national creative director at Leo Burnett India Pvt. Ltd, cites Advertising Standards Council of India rules that bike ads should not show dangerous stunts. “We at Leo Burnett handle both Bajaj Pulsar and Coca-Cola. If the clients are willing, there’s nothing to stop us from doing a cola ad that shows a stunt scene, where the protagonist rides a Bajaj Pulsar," Sridhar says.

Some say a brand logo could appear in an ad by accident, though ad men such as Mendonza say such placement is purely by design. “A recent Park Avenue ad displayed a Mont Blanc pen by accident and the client insisted on it being removed. Before an ad is released, it’s vetted several times over by the client, the agency and the post-production team," Mendonza says.

Co-branders share ad making and telecast costs by different ratios depending on each side’s brand share in the spot.

For all the benefits, though, there are sensitivities that cannot be ignored. Mendonza underlines that this kind of execution needs to be done imaginatively and is best executed by product placement specialists. Also, in 20-30 seconds, it’s hard enough to do justice to one brand; promoting two brands equally is tough.

Brand recall—already affected by overwhelming clutter in the retail and media space—could also get further blurred. “While creating advertising for one brand, your focus is on delivering your message in the best possible manner in those 20 or 30 seconds. So, any other brand is a distraction and needs to be avoided," says M.G. Parameswaran, executive director and CEO at Draftfcb+Ulka.

“The only exception is where you need the other product and brand to tell your brand story," he adds. “For instance, in the Tata Green battery commercial, they showed a Tata Indigo sedan, instead of showing a faceless car."