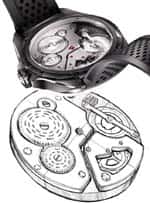 In a quartz watch, the energy from a battery is used to vibrate a quartz crystal. This vibration is measured and used to tell the time. In a more traditional mechanical watch, a series of springs, gears and an escapement mechanism is used to transfer the energy of wound springs into a vibration of the balance wheel, which is then measured to produce time intervals.

But this year at BaselWorld 2010, Tag Heuer introduced the new Pendulum concept that for the first time poses a serious challenge to the presence of a hairspring in a mechanical watch. Jack Heuer, scion of the Heuer family and honorary president of Tag Heuer, said in an interview with Mint that the Pendulum was the first time since Huygens that anyone had thought of an alternative for the hairspring. “It is still early days, and we are still testing the concept, but it is truly a revolution. And a great way to celebrate 150 years of Tag Heuer."

This concept also helps avoid some of the weaknesses of hairspring-enabled systems, especially sensitivity to gravity, thermal variations and irregularities in spring structures.

However, the Pendulum is still a concept in an early stage of development. Heuer explained: “While we have proven that this concept will work, we still have some challenges. The most important is a magnetic assembly that will be stable across a variety of temperatures."

However, when collectors and connoisseurs are finally able to buy watches with Pendulums, the pieces will not be available in large numbers. “The idea is not to replace the hairspring in all watches. But to produce an engineering marvel, in limited numbers, for enthusiasts," Heuer explained.