It is a common belief that a low phase in life—a break-up, a professional setback, or illness—can bring on depression, but doctors say it is more complex than that.

Though the exact cause of clinical depression—which affects about 350 million people worldwide—is not known, research shows that several factors could be responsible: chemical imbalances in the brain, problems with the brain’s ability to regulate mood, genetic predisposition, stressful events or medical conditions. 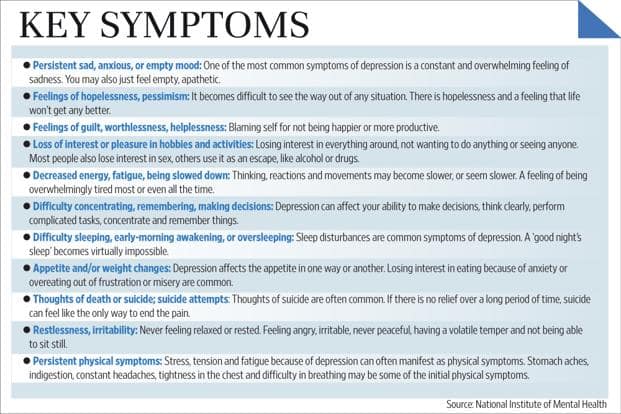 It is the second-most common cause of suffering in terms of burden of illness, the first being cardiac illness. The World Health Organization (WHO) has predicted that it will become the leading cause of death by 2020.

“Clinical depression is one of the most common illnesses in terms of mental illness and 50% of the people who have a first episode of clinical depression will have a second episode," says Sanjay Pattanayak, senior psychiatrist at Vidyasagar Institute of Mental Health, Neuro and Allied Sciences.

Usually, clinical depression occurs when two conditions come together, he says. “While one is genetic disposition towards clinical depression, the other is a stressful life event that brings out the illness. Depression cannot be blamed on teachers, exams, or relationship partners or someone else, as there are people who are predisposed towards it," he explains.

Pattanayak adds that while the first episode generally occurs when it is related to a stressful life event, the second episode may occur even when life is going smoothly. “I get patients who say even though it is my son’s marriage, I do not feel excited or happy—such are the cases of clinical depression," he says.

However, Pattanayak warns that clinical depression should not be confused with depression from stress, which is far more prevalent.

Depression from stress, what is called sub-syndromal depression (SSD), can be recognized from symptoms like low energy and mood swings. He says, “Nearly 30-40% of 25-35-year-olds are going through SSD worldwide, but a psychiatrist needs to be consulted if it becomes prolonged."

K. Srinath Reddy, president of Public Health Foundation of India, says there are two types of conditions that can lead to clinical depression: endogenous and exogenous. “Endogenous depend on the way the brain reacts or alteration of neurochemicals in the brain, which could also have genetic reasons," he says. Exogenous are external conditions—reactions to stressful events.

Reddy says that clinical depression occurs because of multiple stressful factors and lack of adequate coping. “Much depression can be prevented and treated, most of it through counselling, but also through drugs," he adds.

A paper published in the Australasian Medical Journal in March 2013 points that depression is becoming an important public health challenge in developing countries, with the elderly being particularly vulnerable as they often have multiple co-existing medical and psychological problems.

“According to a WHO report, patients over 55 years with depression have a four times higher death rate than those without depression, mostly due to heart disease or stroke," says the paper titled Elderly depression in India: An emerging public health challenge.

Changes in the framework of family support aggravate the situation, it says. “With ongoing economic development, children are moving to urban areas, sometimes leaving their parents alone at home. If the parents move with their children, they are sometimes unable to adjust to the new environment. The change in the family structure along with economic insecurity results in the elderly losing their relevance and significance in their own house and increasing feelings of loneliness. This has a detrimental influence on the psychological health of the elderly," it adds.

“Even though depression is the commonest psychiatric disorder in the elderly, it is often mis-diagnosed and under-treated. Perhaps due to the misconception that depression is part of ageing, rather than a treatable condition. In the absence of treatment, there will be significant clinical and social implications in the lives of the elderly, as depression has a tendency to be chronic or recurrent," the paper adds.

Amitabh Saha, senior psychiatrist with Pushpanjali Crosslay Hospital in Vaishali, Ghaziabad, says that changes in sleep pattern are usually the first sign of depression. “A person does not feel relaxed. He/she is less energetic, and has difficulty in taking decisions and feels low without any reason," he points out.

Other symptoms are irritability on trivial issues; fatigue, which cannot be described; increase or decrease in appetite and a decrease in sexual drive, Saha adds.

“Either there is deficiency in the body’s inner coping mechanism or the extent of stress from environmental factors (or external factors) is so high that the body cannot handle it," he says.

Subscribe to Mint Newsletters
* Enter a valid email
* Thank you for subscribing to our newsletter.
Topics
science
Close
Recommended For You
Feedback
Select your Category
Your Message
No Network
Server Issue
Internet Not Available