Thank you for the great gift, from the people of Vellore. You have brought us to the cinema hall once again." Tushar Dhingra, chief operating officer, Adlabs Cinemas, flaunts the message he got on his phone a few days after the company transformed two existing single-screen theatres in this small town in Tamil Nadu into multiplexes.

The new multiplexes have air-conditioned halls and plush seats, unlike the previous “boring" single screens. “And it isn’t that we are charging an exorbitant sum in return for such facilities," says Dhingra. “At some of our multiplexes, we are offering tickets for as low as Rs10. That isn’t too much for a new film, (and) a swank and hygienic environment."

Adlabs Cinemas, a division of Reliance-Anil Dhirubhai Ambani Group (R-Adag), is not the only company busy transforming single-screen cinema halls across the country into multiplexes or launching new ones. Multiplexes today have moved beyond metros, and are flourishing in small towns across the country. According to a report by AT Kearney, Inc., a management consulting firm, there will be 2,000-3,000 multiplex screens in India by 2009-10—about six times the 480 screens in 2006. 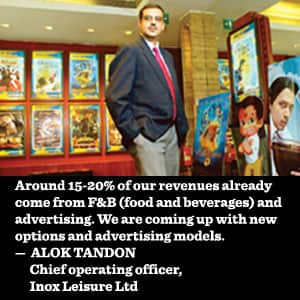 Experts say that while increasing consumerism and favourable demographics are the broader reasons for the growth in the leisure sector, the popularity of the mall concept, increase in film production, growing ticketing revenues and the significant cost advantages that multiplexes offer vis-à-vis single screens are some key factors driving the boom.

Many leading corporate groups with deep pockets are buying into this growth story by investing heavily in building multiplexes, particularly in newer territories. Adlabs, for instance, plans to open an average of three screens every week this year, while Cinemax plans to add around 240 multiplex screens across the country. Real estate firm Housing Development and Infrastructure Ltd (HDIL), a new entrant in the segment, plans 150 multiplexes by 2009, under the brand name Broadway. Foreign players, too, have shown keen interest. US entertainment giant Time Warner and Australia-based The Hoyts Group are already in talks with Indian real estate developers to set up a chain of multiplexes, according to media reports.

Some of the money flowing into the sector has been raised from the stock markets. Five of the six multiplex companies currently listed have collectively raised Rs637 crore since 2005. Adlabs was among the first to tap public money through an IPO in 2001; the others who have taken the same route have been as successful. 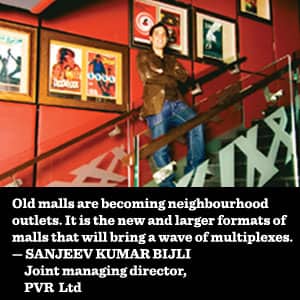 Five of the six companies listed have outperformed the Bombay Stock Exchange’s benchmark index, Sensex. The stocks of two companies, Adlabs Cinemas and Pyramid Saimira Theatre Ltd, posted a more than 200% rise in value between January and December last year, while that of Shringar Cinemas rose more than 100%.

And the companies believe this is just the beginning. The Indian market, they say, is underserved when it comes to multiplexes. “We are under-screened as a country. There are newer segments of audiences coming in to watch films. And of course, the number of movie releases—both Indian and Hollywood—has gone up dramatically," says Shunali Shroff, head of corporate communications, Shringar Cinemas. A comparison with the West does attest to this: India has less than 13 screens per million population, against 117 in the US, 52 in Italy and 30 in the UK.

This growth story has not been plotted just on the relatively modest number of screens. The increased demand and supply of films has ensured a steady rise in revenues from cinema halls. “There was a good line of films this year, and the quality of films will only get better in future," says Sanjeev Kumar Bijli, joint managing director, PVR Ltd.

Cinema revenues are likely to touch $4.4-$5.1 billion (about Rs17,500-20,000 crore) by 2011 from $1.8 billion in 2006, according to the AT Kearney report. On the supply side, companies such as Network18, R-Adag, UTV Motion Pictures Plc., Percept Holdings Pvt. Ltd, Carving Dreams Entertainment Pvt. Ltd, Eros International Plc. and Saregama India Ltd have committed more than Rs4,000 crore on about 140 film projects over the next two years. 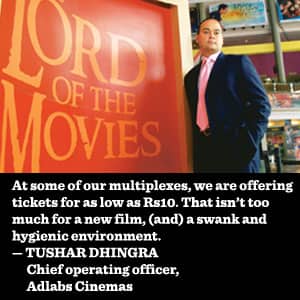 Pricing affords the other big opportunity. Ticket prices in India, averaging less than $0.5, are still among the lowest in the world, though India tops the list in terms of the number of tickets sold: 3.7 billion tickets were sold in 2006, according to AT Kearney. The low base offers scope for further increases. And as multiplexes offer better services, they can charge higher prices, experts say.

Most multiplex operators, in fact, are adopting flexible pricing. “Our average ticket prices this year were Rs100-125. But our ticket prices for morning shows (with low occupancy) can come down to Rs60. Similarly, we also charge Rs320-340 for select hit movies which have huge demand," says Alok Tandon, chief operating officer, Inox Leisure. Such dynamic pricing helps ensure a higher occupancy rate at multiplexes, which adds to the other economies of scale the multiple screens offer.

The variation in pricing also allows multiplex players to effectively tap newer markets, across tier II and tier III towns. “There is a considerable demand for a good movie viewing experience in such towns and customers have even started to pay a premium for the same," says Devang Sampat, vice- president, marketing and programming, Cinemax India.

About 65% of the total box office collections in India come from smaller towns, and the share is expected to rise to 70% in three to five years, according to AT Kearney projections. “We already have a strong presence in smaller cities and, in due course, we will be present in many more smaller towns. Human resource cost and rentals are much lower in smaller cities and towns," says Shringar Cinemas’ Shroff.

The spread of multiplex chains will also give exhibitors better leverage against film distributors, who enjoy considerable clout in the cinema business. “The envisaged growth of multiplexes into tier II and tier III cities by taking (over) existing movie halls will ensure complete extinction of the traditional distributors. Eventually, there will remain only the large studio houses integrated with the exhibition industry," says Saurine Doshi, partner, AT Kearney.

Besides the advantages of multiple screens and market share, multiplex players are also looking to tap allied segments, such as food and beverages, which are integral to the multiplex experience. “Cinema goers usually like to eat out while going for a movie. It is, thus, a natural area of expansion for us," says Bijli.

Luxury is another differentiator that some multiplex companies are banking on. PVR, for instance, provides lounges for “guests" to relax in before they enter exclusive halls with luxurious recliners. Priced at Rs750, these cinema tickets come with snacks and beverages, plus customized services.

“Margins are higher for such facilities, and they do good to the brand image as well," says Sampat. Such premium services are likely to have a limited roll-out because they are relevant only to a very small audience group, say market players. But their potential as an additional revenue source, and as a differentiator from other multiplexes, is undeniable.

The future also looks promising. Multiplex companies, according to Mumbai-based brokerage firm Keynote Capitals Ltd, are expected to see a revenue growth of 125% during FY08 and 72% during FY09, while profit is estimated to grow at 85% in FY08 and 56% in FY09.

“A number of multiplex companies have not participated in the market rally during 2007, and we expect these to catch up during 2008," says Nitin Khandkar, senior vice-president, research, Keynote Capitals.

Agrees PVR’s Bijli: “Old malls are becoming neighbourhood outlets. It is the new and larger formats of malls that will bring a wave of multiplexes in the country."