Television commercials of decorative paints squeezed into the top 10 in the Mint-Synovate-TVAdIndx survey in August, as Indian families prepared to spruce up homes ahead of the festival season.

Asian Paints and other paint makers started their advertisement campaigns to attract customers during the three-month festival season that started September, when demand for such products peaks.

The Asian Paints advertisements captured the ninth and 10th spots on the ad reach index, a measure of brand recall and awareness. Asian Paints last got a spot in the top 10 in January.

The Lay’s Spanish Tomato Tango potato chips commercial took the No. 1 spot on the ad reach index with 80 points. It scored 96 on brand recall and 83 on awareness. The survey polled 753 respondents from high-income groups in New Delhi, Mumbai and Bangalore.

Hero MotoCorp., earlier known as Hero Honda Motors Ltd, took the No. 3 spot as the motorcycle maker continued its rebranding campaign after ending a more than two-decade-long partnership with Japan’s Honda Motor Co.

Packaged foods and mobile phone services had dominated the index in July, with Idea 3G National at No. 1 with 81 points. The packaged food advertisements that got a top 10 spot in the previous month include Cadbury 5 Star and Knorr Soupy Noodles—neither has retained a place in the ad reach index .

Lay’s Spanish Tomato Tango also captured the top spot in August’s ad diagnostics index—a measure of the softer features of ads, such as likeability, enjoyment, believability and claim—with a score of 80. Idea 3G National had topped the list in July with a score of 81.

Wrigley’s Doublemint Aqua Splash is the only brand that made it to the ads diagnostics index without featuring in the top 10 on the ad reach index. 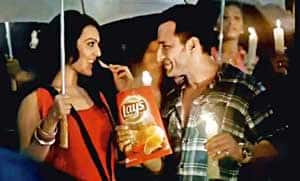