Six years ago, when Steven Spielberg’s science fiction film Minority Report showed a passenger on a subway train in the year 2054 getting news on a portable device, not many would have expected this to become a reality in the first decade of the 21st century.

The emergence of Web 2.0—the second wave of the Web, after the dotcom burst in early 2000 which enabled a new generation of services and business opportunities on the platform—is redefining the way news is gathered, packaged, delivered and consumed by people.

To be sure, traditional media platforms are still going strong in a country like India, where only a minuscule fraction of the population has access to the Internet—but Web 2.0 proponents say the future of news is digital.

“It’s not just convenience and interactivity that the digital environment provides, economics and environmental factors will also force us to move from paper to a paperless world," says Sanjoy Narayan, chief operating officer, India Today Group Digital. “In the time to come, news will become more immersive. New technology will have people experience news events and stories rather than just read about them," says Bruce Macfarlane, vice-president and managing director, Asia-Pacific, Dow Jones and Co. Another Web 2.0 enthusiast, Rafat Ali—a news blogger from paidContent.org—says, “The future will see more control in the hands of news consumers, and multiple forms of media integrated into a single format."

Mint presents insights from these three experts, operating in different areas, on the future of news in the “Web 2.0 Era".

Last year, on 16 May, technology blog Engadget ran a story based on what it thought was an internal Apple email, that the launch of the iPhone was going to be delayed for several months. Engadget had sought comment from Apple, but after they didn’t respond for two hours, the popular blog ran the story. Apple market cap fell $4 billion (about Rs16,000 crore) in six minutes. Engadget later corrected the story and the stock recovered before close, but many investors lost (and made) big.

Clearly, the impact of media on a company’s share price is linked to how the story is handled. If you don’t pick up the news quickly and act on it, the impact can be very serious. The employees at Apple were not paying immediate attention to the potential information—or the lack of it. They all learnt lessons from the incident.

What we have seen globally with the advent of Web 2.0 is the rise of consumer-generated media, blogs, wikis, and all these have led to the creation of a new conversation.

For instance, when Hong Kong-based English daily, The Standard, on 19 May 2005 reported that Walt Disney Co. would hold Chinese banquet-style wedding receptions at its Hong Kong Disneyland Hotel, where the menu would feature shark fin soup along with other traditional delicacies, ecological blogs and websites picked up the subject of shark fin soup, capturing the attention of regional and international media, and environmental groups. The papers picked up the issue much later. The slam campaign against the media and entertainment company that lasted almost five weeks not only saw Disney’s share plummet, but also forced the company to withdraw the shark fin soup from the menu.

The days of the commentator, as someone licensed to speak, have become less important. We see increased volumes of people making comments and participating in conversation, which traditional media can’t access.

Today, there are many more sources of information than ever. This not only poses challenges but also places a lot of emphasis on the importance of tools to gauge information. A story might have been generated from Mumbai, Delhi or Detroit, but it’s the speed with which news can be accessed, and its ability to be read in real time, that has changed the way people consume news.

Therefore, companies have to think about an audience in broader terms. Very often, smaller byte-sized chunks of information are being consumed by the new generation consumers. The digital natives don’t follow the traditional manner of reading but want news in the form of headlines and snippets that can be read on mobile devices and PDAs (personal digital assistants).

It’s all about getting to the news very quickly. Customers pay for customization. In the last year, we have seen a drive from end users to define what they want, and they are also letting their own companies know about it. Employees are, therefore, increasingly making it clear that they don’t want to go to the company’s website for information, but want it on their BlackBerry or other hand-held devices.

The last 18-24 months have seen the rise of new media linked with end users. Also, companies are increasingly beginning to realize that internal intelligence lends competitive advantage. If you scratch the surface of any strong company in a knowledge economy, you will find beneath it a strong information system.

In all this, the one thing that is going to be very important is quality, reliability and trust—especially in this new environment, with less regulation, journalistic code and respect for reputation.

‘Should we wait for things to go bad, or take steps in anticipation of a change that is inevitable?’

The future of news is digital. And there are several factors driving this phenomenon.

One is technology, and the evolution of hardware married to technology. It wasn’t too long ago when somebody used a cellphone to send an SMS for the first time ever. 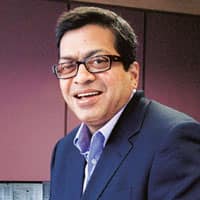 Today, the same cellphone is used for receiving and sending emails, clicking pictures, listening to music, sending multimedia messages, and accessing the Web. Very soon, consumers will be using it as a television screen.

Today, there many devices like a mobile phone that are being used to gather and disseminate news, or information, that could be personal, related to one’s business, or pure entertainment.

The comfort and convenience associated with these devices will ensure that more and more consumers will get hooked on to them. People in the business of news will, thus, have to devise ways to leverage these platforms to sell their content.

The second factor pertains to the change in consumption habits that is driven purely by the evolving technology. Earlier, an average consumer of news would get up in the morning, switch on the television to catch the latest news bulletin, and read newspapers at the breakfast table or on the way to office. Today, one can get news alerts through SMS several times a day, or access news websites of one’s choice through a laptop or even a hand-held phone, get RSS feeds delivered on the comp or even the BlackBerry.

The game, therefore, is not about what the consumer wants but when and how he wants it. And this shift in the consumption pattern demands that media owners redesign their business model.

The third factor relates to the demography and the societal changes associated with it. The current generation is familiar with cellphones and computers from Day 1.

Social networking sites, sharing videos online and writing blogs are a part of life for them. It will be foolhardy for traditional media companies to hope that when these youngsters grow up, they will start behaving like today’s mature consumers. It will be naive to think that consumers, who in their formative years read news on the Web, will start reading newspapers when they turn, say, 40.

The fourth, and a very crucial factor, concerns the environment. Printing newspapers requires cutting trees. And cutting trees has an environmental cost associated with it. Digital publishing doesn’t have as much of an adverse effect on the environment as using natural resources may have.

So, there are causes as well as reasons for things to go digital.

It is no wonder then that smart media companies have started moving along the path that most global media organizations have gone through.

One may argue that in the Indian scenario, old media platforms such as print are not yet gasping for breath. But a larger question that begs an answer is, should the industry wait for things to go bad, or take steps in anticipation of a change that is inevitable?

Future of News: Reasons for Optimism among Pessimism

The future of news is whatever you want it to be. And no, that is not a glib answer. For the last century, whatever the news media’s output was, it was deemed to be “news". But now, especially in the last three-four years, people define how and what they want to consume, and what they consider news. They are increasingly defining what’s interesting to them, and what’s important for them. The “news" for an individual is coalescing around his or her interest areas, be it topic-based, social network-based, or local area-based. In other words, things that directly affect them on a day-to-day basis.

Everyone is still getting exposed to the broader definition of news: things that are happening around the world in wars, politics and other areas. But the filters—to tune off those parts, and tune into the areas that they define as important to them—have become a lot more effective.

Certainly, the Internet is the main filter that helps expand and contract the definition of “news" in any way you want it to be. The delivery of news is now defined by convenience, not by the container it comes in. That means tools such as RSS, widgets and SMS delivery are not containers, but just some of the many ways we define what we like and how we like to get it.

News consumption will increasingly be a part of the daily activity of work, leisure and family time, without discrete time attached to it. News will come in as we carry on with our daily lives, not because we go hunting for it.

As for the future of news delivery, the choices of filters we have to parse the news, which are now beginning to overwhelm us, will give rise to a layer of tools, companies, and even human beings (editors) on top of it, that will help us make sense of the world around us. This will also fuel a new generation of news entrepreneurs, with new ideas on how to report news, develop business models around news and its delivery.

So, the future of news media companies may be in trouble, but not news. Declining newspaper revenues and the decline of local TV stations—at least in the US—are both results of changes in news consumption, and the fact that they are still just responding to these changes, for the most part.

What is also in trouble is reportage of events around the world that don’t affect us on a day-to-day basis, but are important. For instance, the Iraq conflict. Hopefully, we will find new ways of funding the big and dangerous journalism assignments, driven, in part, by the altruism of wealthy donors. Also, the cost of reporting is coming down drastically, so that gives us more reasons for optimism: While the old economics of the news business are being eroded, new economics are emerging, built on efficiency, speed and less flash.