The decade in art

The decade in art

The centrepiece of artist Sudarshan Shetty’s 2006 exhibition titled Love was a stainless steel dinosaur making love to a shiny sports car. Love, the artist pointed out, begins with a basic human emotion, but at the other end of the spectrum it becomes a market phenomenon. Shetty’s installation, a metaphor for the old falling in love with the new, illustrates a decade in which Indian art made strange bedfellows with the bazaar. 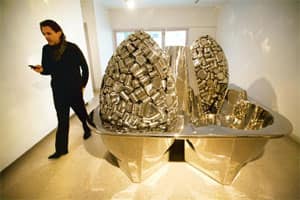 Contemporary art from India enjoyed a spillover of this success. The immature market was unable to contain the euphoria. Prices spiralled out of control. And between 2005 and 2006, the canvas got vulgar: some investors and gallerists even colluded to place false bids. In all of this, the art being produced became secondary—almost assembly line. Perhaps, the best illustration of all that was wrong were the art funds that came up, the most notorious of them being Neville Tuli’s Rs100 crore Osian’s Art Fund and Ajay Seth’s Copal Art Fund that aspired to touch the Rs1,000 crore mark.

This frenzy was very much in tandem with the money-minded upswing in other parts of the world, although on a far different scale. While Indian art was making its million-dollar debut, British artist Damien Hirst was tagging his diamond-studded skull, For the Love of God, at $100 million.

On the upside, the boom spurred ambition. Subodh Gupta became the first Indian artist to have his name recognized across the globe, even participating in prestigious charity events such as Bono’s RED Campaign. This wasn’t a flash in the pan. In the past few years, there hasn’t been a Biennale that hasn’t featured him—from Art Basel to the Venice Biennale, and other fairs in London, Paris, Zurich, Brisbane and Seoul.

Other artists such as Atul Dodiya, Jitish Kallat and T.V. Santosh acquired an artistic vocabulary that internationalized their collector base. Their art was getting bigger too, forcing galleries to step up curatorial practices and ramp up their spaces. Gallery Chemould in Mumbai, one of the country’s oldest showcases for contemporary Indian art, moved to a larger space in 2007. Several new galleries—Project 88 and Chatterjee and Lal in Mumbai, Galleryske in Bangalore—were founded. New magazines of art news and criticism such as Art India and Art & Deal flourished. Jawaharlal Nehru University in New Delhi instituted art history graduate courses that are producing a new generation of museologists and art critics. India even got its first international scale art fair, the India Art Summit, in 2008.

There was one factor in particular that orchestrated the upswing. This was not an auction house or an artist, but an art gallery—the Bodhi Art Gallery. Founded in 2006 in Mumbai by Amit Judge, a dynamic entrepreneur who set up, among other businesses, the coffee chain Barista, it transformed the rules of the game. At its peak, Bodhi had centres in New Delhi, Singapore, New York and Berlin. The artists whom Bodhi represented with style and panache across the world, loved the gallery. If art critic Girish Shahane calls Bodhi the most prominent emblem of the art market’s dizzying climb, it is also the emblem of its free fall. When the global recession hit the Indian art market in early 2009, all of Bodhi’s international outfits were forced to shut shop. Prices of some of their feted artists came down by 50-70%. 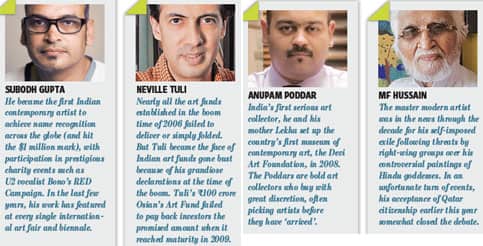 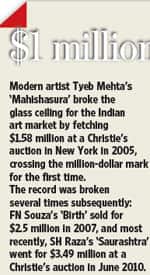 After the recalibrations that followed, Indian art is once again poised for glory. This time, however, all parties concerned will be cautious. The first “green shoots", according to a report by London-based art market research firm ArtTactic, were seen last March.

Aside from the fact that the Indian art market came full circle, it was the decade when the very definition of contemporary Indian art practice took an about-turn.

The 2002 edition of Documenta, a major exhibition of contemporary art that takes place every five years in Kassel, Germany, heated up the scene by inviting Delhi-based Raqs Media Collective to show their work. This was the beginning of the collective’s engagement with the contemporary art world that has resulted in some highly compelling installation work in recent years. The 2009 Venice Biennale, too, invited performance artist Nikhil Chopra to represent India, establishing a new way in which emerging artists from India would engage in the global dialogue—with more confidence.

Most importantly, this was the decade when the creature called the Indian art collector came into being. Up until this decade, serious collectors of Indian art such as Emmanuel Schlesinger and Charles Herwitz had been European or American. Collectors such as Anupam Poddar, Kiran Nadar and Rajshree Pathy are promising additions functioning outside the market realm. Poddar’s 7,500 sq. ft non-profit Devi Art Foundation is in effect India’s first contemporary art museum. And the good news is that the Indian government is working to make this sort of philanthropy tax efficient.

We do have miles to go in terms of developing a viable infrastructure for art education and appreciation, but it seems like the word ‘art’ itself has acquired a new energy in the nation’s consciousness.

The celebrated British sculptor Anish Kapoor’s recent foray into India made big news, making for a fitting endnote to the decade. And it is quite the metaphor then that his Sky Mirror stationed in the lawns of the Capital’s National Gallery of Modern Art, looks skywards.