Silver at the end of 4 bouts in six hours

Silver at the end of 4 bouts in six hours

London: A silver medal obviously does not have the glitter of gold, but there was no diminishment in glory for Sushil Kumar although he finished second best in the 66kg freestyle wrestling event. 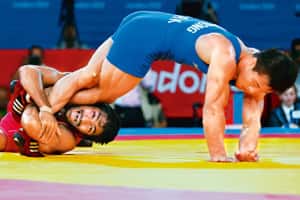 India’s Olympic quest had virtually tapered off till Yogeshwar Dutt’s bronze medal in the 60kg freestyle event on Saturday. Then, Sunday morning, Kumar took the ring to show why and how wrestling could be India’s medal bounty in the future.

While M.C. Mary Kom’s exploits in these Games have earned international attention—and deservedly so—Kumar makes an equally compelling story in the way he has risen from an underprivileged background and a life of hard-ship to legendary status.

The son of a Delhi Transport Corporation (DTC) bus driver who was also part-time wrestler, Kumar took to the ring only after his cousin gave up since the family couldn’t afford non-earning males. From there on, it’s a wonderful story of a gruelling decade in which Kumar spent hours in the akhada honing his skills, while his family strived to make him wear the India colours.

Once he did, his career took even sharper definition, reaching a high point in Beijing when he won a bronze, thanks to the repechage system which allows first round losers another opportunity.

For the London Olympics, though, there was skepticism about his fitness and advancing years. He had come through a series of injuries, and there was speculation whether he still had it in him to compete at this level.

On Sunday, Sushil had the wrestling arena here in thrall as he moved from bout-to-bout-to-bout-to-bout in the manner of a man possessed. His skills were in ample evidence, but even more, his resolve. Before the day began, the media manager of the contingent had said how determined Kumar was to win a medal. “That’s been his only refrain since he rejoined the squad on 8 August," said the manager. From his moves and manner in the ring right through the day’s session, that intent found superb expression. After starting strongly against Beijing gold medallist Sahin Ramazan of Turkey, Kumar twice came from behind to win, digging deep to find strength and stamina just when his opponent thought he would crumble.

The most dramatic fight was the semi-final against the dangerous Akzhurek Tanatarov of Kazakhstan. After winning the first series 3-0, Kumar lost the next 0-3 to keep his supporters on tenterhooks. In the decider, he was again 0-3 down with seconds ticking away violently, when he pulled through sensationally, grabbing hold of his opponent by the legs and raising him into the air, a la the aeroplane spin made famous by the late Dara Singh.

At the end of the round, the points read 6-3 in his favour and a medal had been assured. In the context of all that had transpired, the final was a bit of an anti-climax, but Kumar’s place in Indian sport history had been assured. Nobody else has ever won an individual medal twice. He had gone from bronze to silver. “I had promised to change the colour of the medal after Beijing," he said after his bout. “I aimed for gold, but got silver."

If he maintains his fitness and hunger, who knows, he might still be able to change the colour of the medal next Olympics: this time for the most lustrous.

Ayaz Memon writes a fortnightly column in Mint, Beyond Boundaries